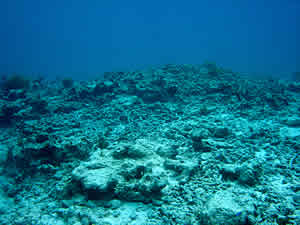 More than a third of coral reef fish species are in jeopardy of local extinction from the impacts of climate change on coral reefs, a new scientific study has found. (Local extinction refers to the loss of species from individual locations, while they continue to persist elsewhere across their range.)

A new predictive method developed by an international team of marine scientists has found that a third of reef fishes studied across the Indian Ocean are potentially vulnerable to increasing stresses on the reefs due to climate change.

The method also gives coral reef managers vital insights to better protect and manage the world's coral reefs, by showing that local and regional commitment to conservation and sustainable fisheries management improves prospects for coral recovery and persistence between storms and bleaching events.

The team applied their 'extinction risk index' to determine both local and global vulnerability to climate change and human impacts. They tested the method by comparing fish populations before and after the major 1998 El Nino climate event which caused massive coral death and disruption across the Indian Ocean.

In all, 56 of the 134 coral fish species studied were found to be at risk from loss of their habitat, shelter and food sources caused by climate change. Those most in jeopardy were the smaller fishes with specialized eating and sheltering habits. Because most of these species have wide geographic ranges and often quite large local populations, few were at particular risk of global extinction.

"The loss of particular species can have a critical effect on the stability of an entire ecosystem – and our ability to look after coral reefs depends on being able to predict which species or groups of fish are most at risk," explains lead author Dr Nick Graham of the ARC Centre of Excellence in Coral Reef Studies and James Cook University. "Until now, the ability to do this has been fairly weak."

"For example, we know that the loss of seaweed-eating grazing fishes can lead to coral reefs which have suffered some other form of disturbance being replaced by weeds. Protecting these fish, on the other hand, gives the corals a much better chance to recover.

"Where there is a widespread death of corals from a climate-driven event such as bleaching, the fish most affected are the ones that feed or shelter almost exclusively on coral. However when corals die off and the reef structure collapses, small reef fish generally are much more exposed to predators.

"By understanding which species and groups of fish are most at risk, we can better manage coral reefs and fish populations to ensure their survival in times of increasing human and climate pressure," adds Dr Shaun Wilson of the Western Australian Department for Environment and Conservation.

The study does, however, offer encouragement by showing that the fish most at risk from climate change are seldom those most at risk from overfishing or other direct human impacts, pointing to scope to manage reef systems and fishing effort in ways that will protect a desirable mix of fish species that promote ecosystem stability.

"Critically, the species of fish that are important in controlling seaweeds and outbreaks of deleterious invertebrate species are more vulnerable to fishing than they are to climate change disturbances on coral reefs. This is encouraging, since local and regional commitment to fisheries management action can promote coral recovery between disturbances such as storms and coral bleaching events," explains Dr Wilson.

They conclude that identifying the fish species most at risk and most important to ecosystem stability and then managing coral reefs to maintain their populations will help 'buy time' while the world grapples with the challenge of limiting carbon emissions and the resulting climate change.

The team adds that their novel approach to calculating extinction risk has wider application to conservation management beyond coral reef ecosystems and can readily apply to other living organisms and sources of stress.