New Inhaler-Friendly Snorkel Could Open Up Underwater World to Asthmatics

Scientist: Salmon Sperm Eyed As Source For Eco-friendly BioLEDs; 'It's Thrown Away By The Ton' 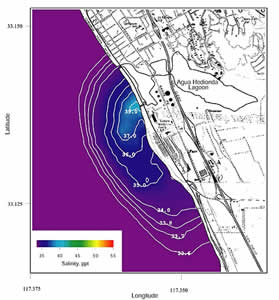 As simulation portrays how brine plumes would disperse when discharged from a proposed desalination plant in California. Credit Scott Jenkins/ Scripp

Before a regulatory structure can take shape to govern how seawater is treated and transported to a thirsty public, a gubernatorial order will be handed down that fast-tracks the construction of desalination plants during an episode of extreme drought when battles over water turn violent. Ecological casualties would be assured.

It's decidedly not what coastal engineer Scott Jenkins and marine biologist Jeffrey Graham hope for. Since 2000, the two have served as consultants to two desalination projects in Southern California that have been proposed by the Connecticut technology firm Poseidon Resources. In the course of their inquiry, the two scientists have come to see widespread construction of desalination plants as inevitable for California but hope that when they debut, state regulators and nature itself are ready for them.

"Are these plants really going to be there when we need them?" said Jenkins, "Will they be there to drought-proof us?"

Undeniable Need: Summer 2008 hadn't even started when California Gov. Arnold Schwarzenegger declared a statewide drought in early June. By that time, some Northern California cities had already made water rationing mandatory; in Southern California, limits on personal use are still optional.

Research being done at Scripps and elsewhere suggests today's seemingly extreme measures stand a good chance of being commonplace in the future. The situation has accelerated the search for new sources of water, including the oceans.

For millennia, people have created drinking water from the sea by distilling the water to separate it from salts. But it's only been a half-century since cost-effective methods for bringing water to large numbers of people have existed. Today the high-pressure filtration method called reverse osmosis has become the leading technique for desalinating large amounts of water. The technique was pioneered in the 1960s by UCLA researcher Sidney Loeb who created specialized membranes through which water, but not salt ions, could pass. He also created the first facility capable of desalinating ocean water in 1967 at the Scripps campus. Proposed Poseidon facilities would produce water with a slight sweetness because it has less salt in it than tap water. The company would have to add minerals to it to keep the desalinated water, which is purer and thus slightly more acidic from corroding city water pipes.

Using either reverse osmosis or distillation, an estimated 13,000 desalination plants operate throughout the world, with the highest concentration found in the countries that ring the Mediterranean and Arabian seas. But few studies have tracked the ecological impact of these plants, which take few precautions to mitigate the environmental damage inflicted as they take in water and return it to the sea.

At the beginning of the process, intake pipes suck in and destroy myriad forms of plankton including phytoplankton and the larvae of invertebrates and fish. The removal of these members of the local ecosystem exacts a certain toll, one for which Jenkins has attempted to formulate mitigation measures for Poseidon.

At the end of the process, desalination plants that create a gallon of freshwater from every two gallons of seawater must find a way to dispose of the remainder. The by-product water has roughly double the salinity of seawater, a concentration well beyond the tolerance of most marine organisms. Many operators of existing desalination plants disregard the danger and simply discharge the hypersaline water back into the ocean. Scientific observations show that some marine organisms have vanished from the areas around underwater outfall pipes where undiluted wastewater is returned to the oceans.

The Limits of Endurance: A handful of relatively small ocean desalination plants exist in California, but the state's Coastal Commission is reviewing another 20 proposed projects on a case-by-case basis in an attempt to find a standard for acceptable impact. Most of the proposed operations have drawn fire from environmental groups for their potential to harm coastal ecosystems. A Poseidon project in Carlsbad, Calif. has come the farthest in the permitting process and could set the bar for the other proposed projects, said Jenkins. In Carlsbad and Huntington Beach, Calif., Poseidon has proposed building desalination facilities on the grounds of existing power plants, using a fraction of the seawater used by the plants for cooling as source water for the reverse osmosis process, while the remainder is used to dilute the concentrated saltwater before it returns to the ocean. Each project would produce 50 million gallons of drinking water per day, enough to serve 300,000 people.

It takes about five parts of unaltered seawater to bring one part of hypersaline water to a concentration of 40 parts per thousand. In Carlsbad, Poseidon would build its plant on the grounds of the Encina Power Station, which uses as much as 800 million gallons of seawater a day. Presently, permits issued to the power station regulate consumption of that seawater. Poseidon must plan, however, for a future beyond Encina's possible decommissioning when the environmental responsibility for seawater consumption would be entirely on the desalination plant.

It has been Graham's role as an advisor to the Poseidon projects to determine what salinity fishes, marine invertebrates, and plants can tolerate. Jenkins has been tasked with determining how long the brine discharged from the desalination plant remains concentrated after it returns to the ocean, a process that requires him to model winds, currents, and other physical factors to determine how the hypersaline plume will disperse. His models have suggested that salinity levels in the brine plume would be within 10 percent of natural background salinity in less than 1,000 feet of the discharge channel when flowing at 250 million gallons per day.

The issue at the other end of the process is the loss of potential value of larval plankton. Jenkins studied possibilities for water intake, or entrainment, in a manner that spares a greater proportion of marine life. Two alternatives, one that employs natural seabed filtration and the use of large intake pipe networks known as seafloor galleries, were both found to be inappropriate for the Carlsbad site due to insufficient sediment cover over the bedrock along that section of the coast. The project's environmental impact report determined that continuing to use the power station's existing intake and discharge pipes would cause the least ecological damage.

At the same time that water-intake methods are being refined, Jenkins is also involved in assessing the suitability of compensatory measures that could be made at locations other than the Encina Power Station. The Coastal Commission's price for greenlighting Posiedon's Carlsbad project will likely include a condition that Poseidon restore at least 37 acres of wetland elsewhere in San Diego County. Jenkins is advising the company on where and how wetland restoration projects might be most effective.

Though the majority of the expertise Jenkins and Graham have brought to the table has been for the benefit of a client, Jenkins said a broader benefit has come in the development of more sophisticated coastal transport models that have application to pollution dispersion and beach erosion prediction in addition to desalination analysis. Jenkins added that as California moves into an era of desalination, the work done now could be parlayed into securing future grants to the institution to advise public agencies who are trying to prepare state residents for the impending water crisis.

Before California implements best practices in the delivery of desalinated water, however, Jenkins and Graham see two potential roadblocks. Even if environmental concerns are addressed to the Coastal Commission's satisfaction, will desalination companies bankrupt themselves to achieve compliance? Currently, desalinated water costs about $800 per acre foot to produce, according to Poseidon. That's half of what it cost 10 years ago but is still several hundred dollars more per acre foot than the cost of bringing water from traditional sources such as the Colorado River or the Sacramento Delta. Poseidon officials believe prices for water from other sources will only increase, but Jenkins fears that onerous regulations could still leave desalination economically uncompetitive, even as the state's need intensifies.

"Projects could be stillborn," he said.

Conversely, the two also fear that Gov. Arnold Schwarzenegger or one of his successors will feel pressured to pre-empt the Coastal Commission and order desalination projects before environmental impacts are understood. Graham sees "a significant danger" in that but also sees dwindling traditional water supplies and rising costs of the fuels needed to deliver water piled on top of a recession.

"Like most things in this world, they're all on collision courses," Graham said.