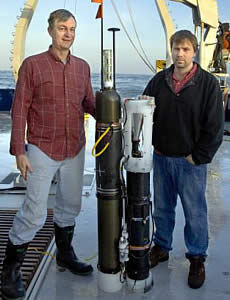 BERKELEY, California -- Oceanographers Jim Bishop and Todd Wood of the U.S. Department of Energy's Lawrence Berkeley National Laboratory have measured the fate of carbon particles originating in plankton blooms in the Southern Ocean, using data that deep-diving Carbon Explorer floats collected around the clock for well over a year. Their study reveals that most of the carbon from lush plankton blooms never reaches the deep ocean.

The surprising discovery deals a blow to the simplest version of the Iron Hypothesis, whose adherents believe global warming can be slowed or even reversed by fertilizing plankton with iron in regions that are iron-poor but rich in other nutrients like nitrogen, silicon, and phosphorus. The Southern Ocean is one of the most important such regions.

"Just adding iron to the ocean hasn't been demonstrated as a good plan for storing atmospheric carbon," says Bishop, a member of Berkeley Lab's Earth Sciences Division and a professor of Earth and planetary sciences at the University of California at Berkeley. "What counts is the carbon that reaches the deep sea, and a lot of the carbon tied up in plankton blooms appears not to sink very fast or very far."

The reasons, while complex, are most likely due to the seasonal feeding behavior of planktonic animal life, and specifically to the effects of the dark Antarctic winter on plant and animal growth and the mixing of surface and deep waters by winter storms. Phytoplankton blooms in the spring may indicate that much of the zooplankton (animal) population essential for carbon sedimentation has starved during the winter.

The Carbon Explorers involved in the study were launched in January, 2002, as part of the Southern Ocean Iron Experiment (SOFeX), a collaboration led by scientists from Moss Landing Marine Laboratory and the Monterey Bay Aquarium Research Institute. SOFeX was meant to test the Iron Hypothesis in waters between New Zealand and Antarctica during the Antarctic summer. The Berkeley Lab Carbon Explorers were originally intended to monitor the iron-fertilization experiment for 60 days, but they continued to report by satellite throughout the Antarctic fall and winter and on into the following year.

"We would never have made these surprising observations if the autonomous Carbon Explorer floats hadn't been recording data 24 hours a day, seven days a week, at depths down to 800 meters or more, for over a year after the experiment's original iron signature had disappeared," Bishop says.

He explains that "assumptions about the biological pump – the way ocean life circulates carbon – are mostly based on averaging measurements that have been made from ships, at intervals widely separated in time. Cost, not to mention the environment, would have made continuous ship-based observations impossible in this case. Luckily one Carbon Explorer float costs only about as much as a single day of ship time."

Bishop and Wood report their results in a forthcoming issue of the journal Global Biogeochemical Cycles. Preprints are now available to subscribers at http://www.agu.org/journals/gb/papersinpress.shtml.

The Iron Hypothesis, science and speculation

In the 1980s, oceanographer John Martin of the Moss Landing Marine Laboratories, who died in 1993, proposed that iron added to regions of the ocean that are otherwise rich in nutrients but poor in iron (so-called high-nutrient, low-chlorophyl, or HNLC, regions) can stimulate the growth of phytoplankton – a bold scientific hypothesis that has since been proven correct.

Martin went further, however, when he suggested that artificial iron fertilization of the oceans could change the climate. "Give me half a tankerful of iron and I'll give you an Ice Age," he boasted in 1988.

In testing the Iron Hypothesis, SOFeX's investigators acknowledged that matters were not quite that simple, and that the crucial question was not whether plankton blooms could be induced but whether the carbon they captured was removed to the deep sea.

The SOFeX research vessels fertilized and measured two regions of ocean, one in an HNLC region at latitude 55 degrees south and another at 66 degrees south. Carbon Explorers were launched at both these sites; a third Carbon Explorer was launched well outside the iron-fertilized region at 55Â°S as a control. Berkeley Lab scientists Todd Wood, Christopher Guay, and Phoebe Lam were members of the expedition, while Bishop monitored and communicated with the Carbon Explorers from Berkeley over a computer link to communications satellites.

One question was whether the relatively silicate-poor waters of the more northerly 55Â° region would allow plankton known as diatoms to form silicon skeletons. If large diatoms could not grow in this HNLC region, the SOFeX researchers theorized, enhanced carbon sinking would not occur. Partly for this reason, most of the effort by the ships was at 66Â°S, where silicon wasn't considered a limiting factor.

To the researchers' surprise, the iron-augmented region at 55Â°N did form a vigorous plankton bloom. Dubbed the North Patch, Carbon Explorers tracked this bloom throughout the Antarctic summer, measuring carbon particles, including waste from grazing zooplankton and other aggregates, sinking beneath the bloom and carrying 10 to 20 percent of the fixed carbon out of the surface layer – at least to below 100 meters. The initial results of the SOFeX experiment, published in Science in April, 2004, seemed to support the Iron Hypothesis in an unexpected way.

But the Carbon Explorers didn't stop after 60 days. The two North Patch floats operated for over 14 months, diving, recording, and surfacing to report data in the world's stormiest waters, traveling almost to South America before falling silent. The Carbon Explorer launched at 66Â° south lasted 18 months, spending much of its first winter recording at 800 meters depth and surfacing at weekly intervals to report, although occasionally prevented by bumping into the underside of the sea ice. The Carbon Explorer data accumulated, awaiting analysis.

Return to the Southern Ocean

In 2007 Bishop and Lam (who was now at the Woods Hole Oceanographic Institution) published measurements from shipboard instruments deployed during SOFeX which suggested that the rosy picture of plankton blooms sending carbon to the deep ocean wasn't so simple after all. Carbon reaching the deep ocean depended partly on particle size and weight; more important, there seemed to be much less particulate matter reaching depth where the biomass was highest, e.g., in plankton blooms.

"This paper was criticized on the grounds that it was based on limited shipboard observations," says Bishop. "So Todd Wood and I turned to the treasure-trove of virtually continuous observations in the records of the Carbon Explorers."

The Carbon Explorers' records through the Antarctic summer and fall of 2002 and the winter and spring of 2003 (and in the case of the float at 66Â° south, much longer) not only confirmed the limited shipboard observations in greater detail but opened up a complex picture of life in the Southern Ocean.

The Carbon Explorer at 66Â°S recorded data never before observed or reported. During the SOFeX experiment, the float had measured the demise of a plankton bloom rich in particulate organic carbon. Particulate carbon levels were severely reduced with the onset of perpetual darkness and sea ice formation, then modestly increased again with the return of light and the melting of the ice. Strong sedimentation – the sinking of large numbers of carbon particles to the deep ocean – was never observed.

Data from the two floats deployed farther north at 55Â°S produced a startling picture. As noted above, the Explorer launched inside the original SOFeX iron-amended region, dubbed 55A, had recorded a long-lasting bloom immediately following iron fertilization, with sedimentation to 100 meters. Remarkably, 55A found an equally strong bloom the next spring in the same region – long after the SOFeX iron was gone – with equally strong sedimentation down to 100 meters.

And while it was unsurprising that the original control float, dubbed 55C, did not see a bloom, a bigger surprise came at depth: a rain of particulate organic carbon at 800 meters down. Carbon Explorer 55C had measured sedimentation beneath a region with no plankton bloom much greater than the 55A float measured under the bloom itself.

To explain this counterintuitive "High Biomass, Low Export" result the researchers considered a number of ideas. Perhaps current shears had separated the plankton blooms from their sedimentation; or perhaps there were "large rare particles" of organic carbon that the Carbon Explorers had failed to observe; or perhaps differences in mixing of surface and deep waters during winter storms had brought sequestered iron back to the surface. The first two hypotheses were rejected, and the third, even if true, would imply that iron-stimulated blooms still lead to reduced carbon sedimentation at kilometer depths.

A fourth hypothesis, taking into account the lighting conditions that encourage or limit the growth of microscopic plants and zooplankton, emerged as the most convincing. Latitude 55Â°S is far enough north for light to reach into the water year round (although in winter it is much reduced). But mixing between near-surface and deeper waters can carry phytoplankton too deep to grow – out of the light, beneath the critical depth where growth is sufficient to meet the energy demands of the whole plant and animal community. The latitudes where the Explorers operated are infamously stormy; in wintertime the mixed layer can reach 400 or 500 meters deep.

To survive the winter, zooplankton have to stay deep, where it's too dark for the phytoplankton they live on to survive. Storms and deep mixing keep the zooplankton alive. "Mixing is the dumbwaiter that brings food down," says Bishop. "The question is whether the dumbwaiter is empty or full."

When mixing is consistently below the critical level, phytoplankton are carried out of the light and can't grow; the dumbwaiter stays empty and the zooplankton starve. When mixing stops in the spring, the fast growing phytoplankton rebound, but there aren't enough surviving zooplankton population to keep up with the growth and resulting bloom, and also less production of the sinking carbon particles other zooplankton species depend on. With fewer animals to intercept the material as it falls between 100 and 800 meters, Carbon Explorer 55A observed a low carbon export to the deep ocean beneath the lush bloom.

Bishop says these observations point to an important lesson: "Iron is not the only factor that determines phytoplankton growth in HNLC regions. Light, mixing, and hungry zooplankton are fundamentally as important as iron."

The Iron Hypothesis isn't wrong, but it's much more subtle than usually stated. Achieving optimum carbon sedimentation from plankton growth may require the right "recipe" of iron and other trace nutrients to grow the right kind of phytoplankton. Says Bishop, "You can grow a lot of Brussels sprouts, but kids won't eat it. The same appears to be the case with diatom phytoplankton and zooplankton. It's the zooplankton community that determines carbon sedimentation."

The new study brings one other important lesson: two Carbon Explorers deployed under similar circumstances experienced subtle differences in ocean physical conditions that resulted in very distinct biological responses. A fleet of Carbon Explorers could yield essential data on the workings of the ocean's biological pump at far less cost than a shipborne expedition, and answer questions that cannot be answered now – such as how much man-made atmospheric carbon the ocean can absorb, and how much longer we can depend on it to soak up our excesses – and most important, how the biological carbon pump will respond to changing ocean conditions.