Female Fish -- And Humans? -- Lose Interest When Their Male Loses A Slugfest

Bradley And Carr Catch Their Limits On Potomac, But Finish Mid-Pack; 'It Was Definitely A Slugfest' 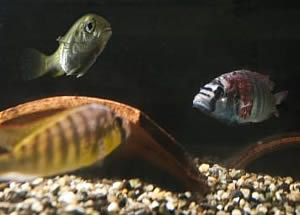 PALO ALTO, California -- You may think of your love for your mate as the noble emotion of a pure heart, but some primitive parts of your brain are taking a decidedly more pragmatic approach to the subject, according to Stanford biologists.

In experiments with African cichlid fish, the scientists discovered that when a female shows a preference for a particular male, but then witnesses him losing a fight with another male, her feelings toward him change.

Areas of the female's brain associated with anxiety showed increased activity after witnessing an altercation.

"It is the same as if a woman were dating a boxer and saw her potential mate get the crap beat out of him really badly," said Julie Desjardins, a postdoctoral researcher in biology. "She may not consciously say to herself, 'Oh, I'm not attracted to this guy anymore because he's a loser,' but her feelings might change anyhow."

"Our intuition is that this response is likely to occur under similar conditions in humans because the brain areas involved are present in all vertebrates and perform comparable functions," said Russ Fernald, a professor of biology.

Desjardins is the first author of a paper describing the research, to be published online this week by the Proceedings of the National Academy of Sciences. Fernald and Jill Klausner, a recent honors biology graduate whose thesis was on this topic, are coauthors.

Desjardins said that with people, the subconscious change of heart would likely happen in response to a failure in any competitive situation â whether it's losing at a game or missing out on a promotion at work â not just a brawl. She said that men might also feel differently after seeing a "female of interest" fail at something competitive.

But all is not necessarily lost for the loser â at least not the human one.

All is not lost for the loser

We can take heart, she said, because we have so much more cognitive ability than fish and can reason our way out of these subtle twinges of doubt. And not all pair-bonding relationships are equal.

"Obviously, long-term committed relationships are very different than, say, people who have just started dating, or are in the initial phases of mate choice," Desjardins said. So losing a game of beer pong may â or may not â have relationship-ending consequences.

Among the fish, the researchers also found that when the preferred male prevailed, the female showed increased excitation in parts of the brain associated with reproduction, as well as some of the brain's pleasure centers.

"In this case, she is turning on her body to get ready to physically mate with this male that she previously chose," Desjardins said. The female also appears to be feeling some sort of pleasurable stimulus in her body, she said.

Desjardins said that while humans may reason beyond the sort of gut reactions displayed in the female cichlids, the human version of the brain regions involved in the fishes' decisions probably play a major role in the snap judgments men and women make.

"You may not know immediately why you are attracted to a certain person, for example," she said. "But it is these sorts of unconscious internal reflexes that we have that are shared with all vertebrates, including fish, that make us feel one way or another before we've even had time to think about it."

These same areas of the brain also probably play a part in other types of reflexive responses, such as a mother's instinct to protect her child.

Desjardins and her colleagues conducted their experiments using a fish tank split into three sections by transparent barriers. In the middle section, they put the female, with a male in each tank on either side of her. The males were always of comparable size and weight â as similar as possible.

The female would typically swim around for a while, then settle down and interact with the male she preferred.

"We know that she prefers a particular male because she will display some mating behavior and he will try to do the same on his side," Desjardins said. Once a female had chosen, she never wavered â until the fight.

On the third day, the researchers took one of the male fish and put him into the compartment of the other male fish. Cichlid males are highly territorial, so fighting ensued instantly.

"In this fish species, fighting means a lot," Desjardins said. "When you fight with a neighbor, you not only physically fight with them, you are also displaying your abilities and your prowess to everyone watching."

The fishy fisticuffs were allowed to continue for 20 minutes, while the female watched. After that time, the researchers knew the female's brain would show clear evidence of her reaction.

Desjardins said that when they dissected a female's brain, they invariably found strong evidence of heightened activity that corresponded with whether the fish's preferred potential mate had won or lost. The researchers ran the experiment with 15 different females.

"I was extremely surprised by how large a difference in brain activity we were able to measure," Desjardins said. "To an outside observer like me, it always looked like the same thing â two similar fish fighting. But to the females, it meant something very different."

Because the female fish had to be dissected in order to assess the activity in their brains, the researchers weren't able to test whether the females' reactions to the fights carried over into influencing their actual mating behavior.

But, Desjardins said, "Now that we know the females consistently react to the fights so strongly, we should be able to answer the burning question, "Will she really dump the loser she used to like in favor of the winner?"