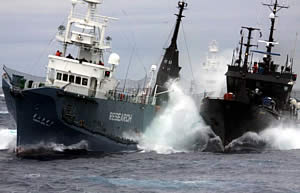 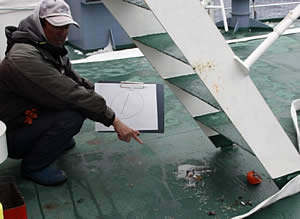 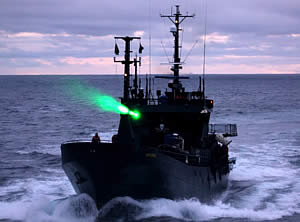 On the early morning of February 6 the Bob Barker appeared in the vicinity of the whale research mother ship Nisshin Maru approaching dangerously from the stern up to a few dozen meters. The Bob Barker had been repeatedly firing a high-power green laser device against the Nisshin Maru crew until well past 1200JST.

After ramming the Yushin Maru No. 3, the Bob Barker activists made use of a large slingshot device to shoot a number of butyric acid-containing bottles against the Shonan Maru No. 2. While most of the projectiles landed in the sea, about 10 butyric-acid bottles hit the Shonan Maru No. 2’s deck. There were no injuries to the crews of the Japanese whale research vessels.