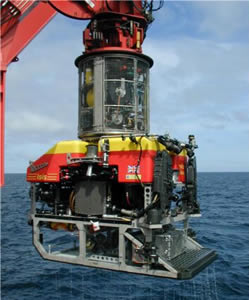 ISIS robot which will be used by scientists to collect rock samples from volcanoes on the Mid-Atlantic Ridge. Credit: NERC

Scientists from Durham University will use robots to explore the depths of the Atlantic Ocean to study the growth of underwater volcanoes that build the Earth's crust.

The Durham experts will lead an international team of 12 scientists aboard Britain's Royal Research Ship James Cook which will set sail from Ponta Delgada, San Miguel, in the Azores on Friday, May 23.

During the five-week expedition they will use explorer robots to map individual volcanoes on the Mid-Atlantic Ridge tectonic plate boundary ā€" which effectively runs down the centre of the Atlantic Ocean - almost two miles (3km) below the surface of the sea.

hey will then use another robot, called ISIS, to collect rock samples from the volcanoes which will be dated using various techniques to shed more light on the timescales behind the growth of the Earth's crust and the related tectonic plates.

As tectonic plates ā€" formations that make up the Earth's shell - are pulled apart by forces in the Earth, rocks deep down in the mantle are pulled up to fill the gap left behind. As the rocks rise they start to melt and form thousands of volcanoes on the sea floor which eventually cluster into giant ridges.

The ridges along the Mid-Atlantic Ridge plate boundary are each about the size of the Malvern Hills and contain hundreds of individual volcanoes.

Principal investigator Professor Roger Searle, in the Department of Earth Sciences, at Durham University, said: "The problem is that we don't know how fast these volcanoes form or if they all come from melting the same piece of mantle rock.

"The ridges may form quickly, perhaps in just 10,000 years (about the time since the end of the last Ice Age) with hundreds of thousands of years inactivity before the next one forms, or they may take half-a-million years to form, the most recent having begun before the rise of modern humans.

"Understanding the processes forming the crust is important, because the whole ocean floor, some 60% of the Earth's surface, has been recycled and re-formed many times over the Earth's history."

Professor Searle's team will include scientists from the National Oceanography Centre, Southampton, the Open University, the University of Paris and several institutions in the USA.

They will date the volcanoes using radiometric dating (which measures the radioactive decay of atoms) and by measuring the changing strength of the Earth's magnetic field through time as recorded by the natural magnetism of the rocks.