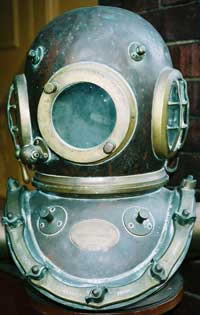 PORTISHEAD, UK -- A former Portishead schoolboy, who set a world record breaking dive half a century ago, is to unveil a plaque to remember his achievement.

British Royal Navy diver Lt George Wookey, who now lives in Australia, is to unveil the plaque near the diving site at Sorfjorden, Arna in Norway at a special ceremony tomorrow.

He made the record dive breathing helium oxygen, wearing a SiebeGorman helmet and a flexible dress standard diving suit.

Since then, the depth record has been exceeded many times, but not using a traditional Siebegorman helmet.

The unveiling ceremony will tie in with the annual International Diving Seminar at which 83-year-old Mr Wookey has been asked to be a guest speaker.

Miss Wookey said: "I did write and ask if I could go and help George celebrate but because of all the red tape involved, it would have been very difficult

"I would have liked to have gone so I could have witnessed the ceremony.

"When he did the dive it was so thrilling.

"It was broadcast on what was then the Portishead radio station and it appeared in all the local papers."

George and Jean moved to Portishead with their parents in 1934. George went to Slade Road School and was a member of St Peter's Church Choir and the local scouts before joining the navy aged just 15.

It is hoped representatives from the British Embassy, the Royal Navy, the historical diving societies of England and Norway as well as members of the oil and gas and diving industry will be at the ceremony.