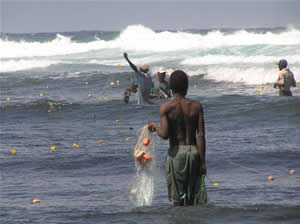 Banning or restricting the use of certain types of fishing gear could help the world’s coral reefs. Credit ARC

TOWNSVILLE, Queensland -- Banning or restricting the use of certain types of fishing gear could help the world’s coral reefs and their fish populations survive the onslaughts of climate change.

An international team of scientists led by Dr Josh Cinner of the ARC Centre of Excellence for Coral Reef Studies at James Cook University has proposed that bans on fishing gear - like spear guns, fish traps, beach seine nets, and gill nets – could aid in the recovery of reefs and fish populations hard hit by coral bleaching events.

Around the world corals have been dying at alarming rates, due to unusually warm water events resulting from global warming.

Research carried out in Kenya and Papua New Guinea has shown that certain types of gear are more damaging to corals, to coral-dependent fish and to the key species of fish that are needed to help reefs recover from bleaching or storm damage.

“This is creating a double jeopardy for both the corals and certain types of reef fish. They are already on the edge because of the overfishing– and the additional impact caused by a bleaching even can push them over” Dr Cinner explains. The result can be an accelerated decline of the reef, its fish populations – and their ability to sustain local people.

“From an ecological perspective, the best response to bleaching is to close reefs to fishing entirely. But that is not feasible everywhere and is a particularly hard sell among the impoverished fishers in developing countries” says co-author Dr. Tim McClanahan of the Wildlife Conservation Society. “In areas where fishery closures are impractical, managers don’t have many options and haven’t been able to do much but watch the reef die and often not recover.”

“Selective gear restrictions offer reef managers and fishers alike some middle ground, reducing pressure on the reef and its fish while it is in the recovery phase, while also providing fishers with some options for their livelihood” Dr Cinner says. This middle way is also more likely to be taken up by fishers. “In other research we’ve found that fishers themselves prefer gear restrictions to total closures, because most fishers use several types of gear so they can still earn a living when the use of one sort of gear is banned. They are more likely to comply.”

They found that spear guns were the most damaging of all – to corals themselves, to susceptible fish species and to the fish needed to help reefs recover, such as parrot, surgeon and trigger fish, which keep seaweeds and urchins in check while the coral re-grows.

“Spear guns target a high proportion of species that help maintain the resilience of coral reefs, but also can result in a surprising amount of damage to the corals themselves. When a fish is shot with a spear gun, it often hides in the reef, so some fishermen break the corals in their attempts to get it.” Dr Cinner says.

But in developing countries, spear guns can be the fishing tool most used by the poorest fishers because they are cheap to make and the yield can be high, so they are an important source of income for poor fishers.

“You can’t simply impose an arbitrary ban on their use – you need to consider issues like compensation, other fishing options, or alternative livelihoods for the affected fishers,” says co-author Dr. Shaun Wilson of the Western Australian Department of Environment and Conservation. “One key issue may be educating fishers about the importance of reef habitat and the species that help to maintain reef quality – and the need to be selective in what they shoot. This would mean fishers could still use this cheap and effective fishing tool without necessarily damaging habitat and reef resilience.”

Fish traps also targeted both the most susceptible reef fish and the ones most involved in reef recovery. Beach seine nets didn’t target as many key fish species as gill nets, traps, or spear guns, but were damaging both to corals directly and took large amounts of juvenile fish.

“Where people really depend on reef resources, it may not be possible to permanently ban all of these types of gear. By creating temporary bans for specific types of gear following a coral bleaching event, reef managers could ease pressure on the reef and its fish population for a time when corals ecosystems are most sensitive without causing undue hardship to the human populations that depend on it.” Dr Cinner says

“Of course, where the conditions are right, managers and fishers don’t have to wait for a bleaching event- preventative gear bans are a good idea, particularly in areas that are highly susceptible to the impacts of bleaching,” says co-author Dr Nick Graham. “And our new research provides managers with some ideas about the trade-offs involved in banning certain gear.”

Dr Cinner says that temporary bans or imposing permanent restrictions on the use of various types of gear can apply to virtually any coral reef management – whether in the developing world or in developed countries such as on Australia’s Great Barrier Reef.

“In principle, it can be used anywhere. It offers both communities and reef managers much greater flexibility. Around the world, communities are increasingly making their own decisions about how to protect their reefs and they could impose voluntary bans on certain gears.

The article Gear-based fisheries management as a potential adaptive response to climate change and coral mortality, by Cinner J et al. appears in the latest issue of the Journal of Applied Ecology.