Marine Scientists: Fear As Ocean Dead Zones Grow; 'It All Bears The Hallmarks Of Human Interference' 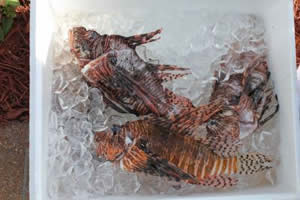 This is an invasive lionfish speared and placed on ice, ready to be filleted and cooked. Credit: Christie Wilcox, Hawaii Institute of Marine Biology

KANEOHE, Hawaii -- Scientists have learned that recent fears of invasive lionfish causing fish poisoning may be unfounded. If so, current efforts to control lionfish by fishing derbies and targeted fisheries may remain the best way to control the invasion. And there's a simple way to know for sure whether a lionfish is toxic: test it after it's been cooked.

Pacific lionfish were first reported off the coast of Florida in the 1980s, and have been gaining swiftly in number ever since. They're now found in marine habitats throughout the tropical and subtropical Western Atlantic, Caribbean and Gulf of Mexico, threatening native fishes with their voracious appetites and unchecked population growth. Targeted removal is the only management strategy that seems to help, and many hope to establish a food fishery to increase the fishing pressure on these ravenous predators. Such a strategy is in jeopardy, though, because the FDA added the lionfishes Pterois volitans and Pterois miles to their ciguatera watch list, a catalog of species that may contain the potentially fatal foodborne toxin, citing evidence that lionfish have positively tested for ciguatera. As of July 2014, though, there are no known cases of ciguatera from eating lionfish.

A new study published in Environmental Biology of Fishes may have an explanation for that. Lead author Christie Wilcox of the University of Hawaii thinks there may be a different reason that so many lionfish are coming up positive on ciguatoxin tests: venom proteins might act as ciguatoxin mimics.

"We already know lionfish produce bioactive compoundsâjust ask anyone who has ever been stung," she said. "We just don't know a whole lot about what those compounds are or whether they occur outside of the venomous spines."

Ciguatera fish poisoning is a foodborne illness caused by eating certain reef fish whose flesh contains ciguatoxins, small lipid toxins originally produced by single-celled dinoflagellates that live on or near the reef. The toxins themselves are colorless, odorless and tasteless, and cannot be destroyed or removed through any normal process of fish preparation, thus accurate testing is the only way to ensure food is safe to consume. Most current test methods are unable to actually detect the toxin compounds, and instead, focus on what the toxins do to cells to determine if a fish is contaminated.

It struck Wilcox that, at the cellular level, lionfish venom might be difficult to distinguish from ciguatoxins because they have similar activities. She took muscle, skin, spine and liver tissue from invasive lionfish and used antibodies against stonefish venom to detect the presence of venom proteinsâand found them. "Lionfish express venom-like proteins throughout their bodies," she said. "We don't know exactly what these proteins are or what they're doing, but we know they're there."

Because tissues for ciguatoxin testing undergo preparation in the laboratory to concentrate the toxins, Wilcox further tested whether these proteins made it through common lipid extraction methods used in ciguatoxin testing. Though the amount was reduced, they could still be detected. "These proteins could be making their way into ciguatoxin test dishes," said Wilcox, "and if they are, there's a chance they're messing up our tests."

The presence of these proteins in your fillets is nothing to worry about, though, says Wilcox. "Unlike ciguatoxin, lionfish venom degrades with at room temperature, let alone with heat, so you have nothing to fear from a lionfish dinner."

The negative impact of false positives is the real issue, says co-author Mark Hixon. "Just the fear and rumor of ciguatera is enough to close a fishery, and that's the last thing we need as we try to encourage people to fight lionfish explosion by eating the invader."

Wilcox is quick to note that the work does not prove that lionfish are perfectly safe. "No one is debating that lionfish could be ciguatoxic," says Wilcox. "But there's no reason to think they're any more ciguatoxic that groupers or other smaller predators in an area. If they're popping positive more often than species with the same diet, that indicates there's something fishy going on."

Wilcox hopes that the research will urge researchers to carefully examine their testing protocols to ensure that the proteins she discovered in lionfish tissues don't lead to unwarranted fear of lionfish consumption. "The first, easy step is to cook or boil lionfish samples prior to ciguatoxin testing. Heat degrades the venom proteins, ensuring they don't cause any problems."