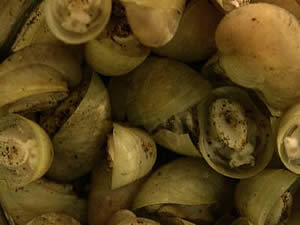 This is a photo of Lepetodrilus gordensis, the species recovered from the Alvin submersible. Credit: Todd Haney

CHICAGO, Illinois -- Marine scientists studying life around deep-sea vents have discovered that some hardy species can survive the extreme change in pressure that occurs when a research submersible rises to the surface. The team's findings, published in Conservation Biology, reveal how a species can be inadvertently carried by submersibles to new areas, with potentially damaging effects on marine ecosystems.

After using the manned submersible Alvin to collect samples of species from the Juan de Fuca Ridge under the northeastern Pacific Ocean, the team discovered 38 deep-sea limpets ( Lepetodrilus gordensis) among their sample. Intriguingly this species is believed to occur only in the vents of the Gorda Ridge, which are 635 km south of the dive site.

"The big question was, how did they get over 600 kilometers from their habitat?" said Dr. Janet Voight, from the Field Museum of Natural History in Chicago. "We discovered that the individuals must have been transported from the Gorda Ridge by our submersible. Even though we clean the submersibles after sampling we had assumed that the extreme pressure change would kill any species which are missed."

The introduction of new species to an ecosystem by humans, often inadvertently, is a big challenge to conservation. How a new species will react to new surroundings, and the effect it can have, is unpredictable. Increases in deep-sea drilling and submersible activity can increase the probability of introductions, but until now hydrothermal vents have been considered too extreme and too isolated to be a source of introduced species.

In coastal environments one of the biggest threats posed by invasive species to native species is disease, as newly introduced pathogens and parasites can cause mass mortality. Diseases that may exist in the extreme environments created by hydrothermal vents have not been well studied.

"We've discovered that it is possible to accidentally introduce a species, and any potential diseases it may carry, from a deep-sea vent to a new location," concluded Voight. "This has implications for the future exploration of hydrothermal vents as it reveals the potential risk of human driven change to the ecosystem."