Gulf Exploration Yields Evidence Of Raw Materials Used By Early Americans; 'We Have Found The Haystacks'

Malaysian Minister Refuses to Rule Out Construction on Sipadan Island; 'Only Light Materials will be Used' 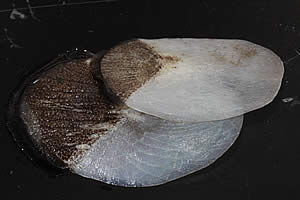 A close-up of two Arapaima scales, overlapping as they would in nature.

SAN DIEGO, California -- It's a matchup worthy of a late-night cable movie: put a school of starving piranha and a 300-pound fish together, and who comes out the winner?

The surprising answerâgiven the notorious guillotine-like bite of the piranhaâis Brazil's massive Arapaima fish. The secret to Arapaima's success lie in its intricately designed scales, which could provide "bioinspiration" for engineers looking to develop flexible ceramics.

The inspiration for this study came from an expedition in the Amazon basin that Marc Meyers, a professor at the Jacobs School of Engineering at UC San Diego, took years ago. The mechanical and aerospace engineering professor immediately wondered at the Arapaima's armor-like protective scales. How could it live in piranha-infested lakes, where no other animals could survive?

Meyers and colleagues set up a lab experiment that pits piranha against Arapaima by using a machine that resembles an industrial-strength hole punch. Piranha teeth were attached to the top "punch," which was pressed down into Arapaima scales embedded in a soft rubber surface (which mimics the soft underlying muscle on the fish) on the lower "punch." The teeth can partially penetrate the scale, but crack before they can puncture the muscle, Meyers and colleagues demonstrate in the journal Advanced Biomaterials.

The Arapaima scale combines a heavily mineralized outer layer with an internal design that helps the scale resist the pirahna's razor-like bite. The mix of materials is similar to the hard enamel of a tooth deposited over softer dentin, said Meyers, who also teaches nanoengineering at the Jacobs School of Engineering "You often find this in nature, where you have something hard on the outside, but it rides on something softer that gives it toughness."

It's a combination that engineers would like to reproduce for applications such as soldiers' body armor, which needs to be both tough and flexible. Other applications might include fuel cells, insulation and aerospace designs.

Meyers is an expert in biomimetics, the study of natural materials from living organisms and the processes that produce them. He says that engineers are pursuing biomimetics because "we are hitting a wall, so to speak" with conventional materials and syntheses.

"We have used our ingenuity to the maximum, but one way to overcome that is to look at nature," Meyers suggested. "The materials that nature has at its disposal are not very strong, but nature combines them in a very ingenious way to produce strong components and strong designs."

Lessons from the Arapaima's scales

In the case of the Arapaima, the ingeniously designed scales serve as peace through strength, allowing them to coexist with piranha when the two are crowded into Amazon basin lakes during the region's dry season.

The Arapaima experiments, some of which were also published in The Journal of the Mechanical Behavior of Biomedical Materials, suggest a few lessons for bio-inspired engineers:

Mix it up: The combination of hard and soft materials, the researchers note, give the scales several ways to repel the bite. The scales overlap like shingles on the fish, and each scale has a "very hefty mineralized layer on top of it," Meyers said. Underneath, each scale is composed of much softer collagen fibers stacked in alternating directions like a pile of plywood.

The external surface is twice as hard as the internal layer, giving the fish a layer of dense armor. At the same time, the structure of the internal layer lends toughness to the scale. "As you stack the layers of fibers in this way," Meyers explained, "they have different orientations, which gives strength that is the same in all directions."

Texture is key: People living in the Amazon sometimes use the ridged Arapaima scales (which can be nearly four inches in length) as nail files. The corrugated surface keeps the scales' thick mineralized surface intact while the fish flexes as it swims. Ceramic surfaces of constant thickness are strained when forced to follow a curved surface, but the corrugations allow the scales to "be bent more easily without cracking," Meyers said.

Freedom to move: The corrugations, the soft but tough internal layer and the hydration of the scales all contribute to their ability to flex while remaining strong. It's an engineering solution that lets the fish remain mobile while heavily armored, and also allows the scales to bend and deform considerably before breaking.

From the abalone shell to the toucan's beak, Meyers said, the natural world is replete with inspiration for 21st century materials scientists. One of his next projects will involve the scales of the alligator gar, a huge fish from the American South whose scales were used by Native Americans as arrow tips. He recently received some samples from Louisiana artist Dianne Ulery, who makes jewelry from the ivory-colored, arrowhead-shaped scales.

Students in his lab also are working on abalone shells and samples of leatherback turtle skin obtained from the National History Museum in San Diego, among other species.

In some respects, the field of biomimetics is a return to the roots of manufacturing, Meyers suggested, when early humans crafted from leather, bone and wood. "We've produced materials with much higher performance, but we're reaching the limit with synthetic materials," he noted. "Now we are looking back at those natural materials and asking, 'how does nature put these things together'?"

When he is not conducting research or teaching, Meyers also is a successful fiction author. He has published two novels so far, "Mayan Mars" and "Chechnya Jihad." He is currently looking for a publisher for his third work of fiction, which takes place in the Amazon. Piranhas are featured in that work in a spectacular manner, he said.