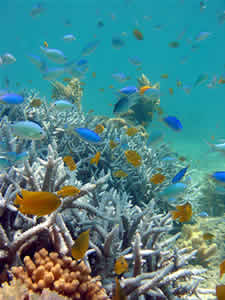 Small fish are at risk of being bullied to death by big ones as coral reef resources are hit by climate change.credit: ARC Centre of Excellence

TOWNSVILLE, Queensland -- Small fish are at risk of being bullied to death by big ones as coral reef resources are hit by climate change.

The finding from new research by a scientist at the ARC Centre of Excellence for Coral Reef Studies (CoECRS) has serious implications for both fishing and reef-based tourism industries.

In the battle to survive on severely bleached corals, large damselfish push smaller ones further from the limited shelter and resources, exposing them to predators that snap them up, the study by Associate Professor Mark McCormick of CoECRS and James Cook University finds.

“We knew that coral bleaching events were causing an increase in fish deaths, but this is the first study to reveal the behavioral mechanism that is driving this mortality,” he says.

“On healthy coral, juvenile damselfish of all sizes have an equal chance of dying, but on bleached coral, it’s every fish for themselves and death rates are much higher among the runts,” he adds.

“The results were surprising, as these damselfish are known to use a broad range of habitats. They are found living on dead coral, rubble and live coral so we didn’t think that coral bleaching would have such a dramatic affect on their mortality. We would expect even more striking impacts on fishes that have a closer association with live coral. ”

“Coral bleaching is predicted by scientists to increase in frequency and severity as ocean temperatures rise due to global warming. Since damselfish are prey for many large fish on the Great Barrier Reef, the behavioral changes could have far-reaching effects,” says Prof. McCormick.

A decline in the number of small fish that live on reefs, means lower numbers of the predatory fishes that eat them – and these are the fish we commonly harvest, like coral trout, he warns.

In order to understand why mortality was increasing, Prof. McCormick placed juvenile damselfish on healthy, bleached and dead corals on the Great Barrier Reef.

He found that fish stayed closer to shelter on live coral, while on bleached and dead coral they moved higher up the coral making them more vulnerable to predation, with the smaller ones being pushed right into open water.

The study also revealed that where damselfish settle at the end of their larval phase plays a crucial role in their survival. “I expected that if fish settled on a bleached or dead coral they would soon move to a healthy one, but this turned out not to be the case,” says Prof. McCormick.

“Even when the damselfish were only 40 cm away from healthy, live coral with fewer inhabitants, they avoided moving. So their initial choice of habitat is key to their subsequent survival.”

Compounding the problem is the fact that most fish reach the end of their larval stage during the hottest months of the year, when coral is particularly vulnerable to bleaching. This timing means that a large number of juveniles are likely to settle onto live coral that may subsequently bleach. The different behavior they exhibit on bleached coral means that virtually all will die, according to Prof. McCormick.

“Those that do manage to survive in degraded habitats will have different body characteristics than those who survive on live coral. The results suggest that if widespread bleaching occurs we may expect to see changes in the characteristics of juveniles – for example, it may be advantageous to settle larger. The natural balance between the number of fish that die as larvae and the number that die when they reach the reef may also be disrupted.” he adds.

The only way to reduce the effect of coral bleaching on fish communities is to make the system more resilient, said Prof. McCormick.

“If we take away the stress of harvesting and pollution caused directly by human activities, the habitat may be better able to resist the stress of increased water temperature and the community may be able to bounce back more quickly from major environmental change.”

The paper, “Behaviorally Mediated Phenotypic Selection in a Disturbed Coral Reef Environment”, by Mark I. McCormick was published in PLoS ONE on Friday 18 September. The article is freely available online at http://www.plosone.org/article/info%3Adoi%2F10.1371%2Fjournal.pone.0007096.