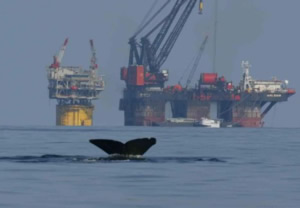 Scientists are investigating whether or not noise generated by the oil and gas industry might affect the day-to-day behaviour of sperm whales.

Dr Patrick Miller from the University of St Andrews and colleagues have undertaken deep-sea research to investigate whether or not increasing sound levels may cause difficulties for deep-diving sperm whales.

The academics examined how the loud noise of airguns that are used to search for oil and gas reserves might affect the behaviour of sperm whales. The study focused on foraging behaviour, which occupies 75 per cent of the time of sperm whales in the Gulf of Mexico.

The latest paper describes experimental observations at sea to test the effects of airguns on deep-diving sperm whales in the Northern Gulf of Mexico - a location with increased oil exploration activity that is progressing into the deeper water inhabited by a population of sperm whales.

Dr Miller commented, "The study was not entirely conclusive because behaviour is naturally highly variable, but it helps to begin to predict how the animals' welfare may be affected. We were able to develop an experimental method that allows us to test specific hypotheses of how sperm whales might react to airguns and found some interesting results."

Sound and movement recording tags were attached to eight sperm whales using suction cups, and their behaviour was recorded before, during, and after the whales were exposed to the underwater noise. The study tested the hypotheses that sperm whales would respond to the noise array by: moving away from it, altering their behaviour patterns, swimming harder to move away from the sound or to catch prey, and/or catching fewer prey per dive.

Dr Miller explained, "Interestingly, the sperm whales observed did not avoid the airguns, continuing on their previous course of travel. Most animals continued with deep-dive foraging throughout the exposure, though one resting sperm whale seemed to delay deep diving while it was near the airguns, possibly to avoid the high levels focused directly underneath an airgun array."

The researchers discovered that all of the tested whales had lower swimming effort when the noise sounded. This was quantified by measuring the oscillations recorded by the tag generated by swimming motions of the animal as it beats its fluke up and down.

Dr Miller said, "Intriguingly, all animals had lower pitching effort when the airguns were on. Sperm whales make echolocation buzz sounds when they home in on a prey item. We found that buzzes were nineteen per cent lower when the airguns were on, but that difference was not significant given the small sample size. This does suggest that there are subtle changes to the swimming and feeding patterns, and that they might be a cause for concern in areas with intensive airgun use like the Gulf of Mexico. Our study is non-conclusive because the nineteen per cent lower buzz rate was not statistically significant given the natural variability in buzz rates, but more research would be needed before such an effect could be ruled out."

Because the observed changes were quite subtle, it is likely that surface observations of sperm whales, alone, would not be able to detect such effects.

"We are trying to unravel subtle changes in behaviour in an animal diving hundreds of metres underwater," continued Dr Miller. "This is difficult research requiring cutting-edge methodologies. It is important to have a strong commitment by noise polluters to support this type of research in order to help regulators balance the needs of the environment with those of industry."

The results presented by Dr Miller and his collaborators may be important for regulators because they call into question the effectiveness of 'ramp-up' procedures, in which the number of airguns are gradually increased to full power.

He said, "The idea is that the gradual increase in the sound level gives animals a chance to move away before they are exposed to the full level of the array. The finding in the study that sperm whales did not move away from the underwater noise suggests that ramp-up may not be an effective procedure for mitigating the effects of airguns on sperm whales.

"Although further study is required our work so far indicates that sperm whales do not avoid airguns, but that they might be affected in subtle but important ways at 1-11 km, the ranges tested in this study." confirmed Dr Miller. "The current 500m shut-down rule in the Gulf of Mexico would not protect animals at that distance, so we may need to consider other ways to protect sperm whales in this important habitat."

The research was part of the Sperm Whale Seismic Study (SWSS), a five-year co-operative study on the lives of Gulf of Mexico sperm whales and how seismic vessels might affect them.