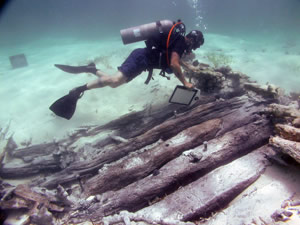 The hull remains of the wreck were measured and compared to the dimensions of known shipwrecks off the Caicos. Credit NOAA

The hull remains of the wreck were measured and compared to the dimensions of known shipwrecks off the Caicos. Credit NOAA

WASHINTON, D.C. -- Maritime archaeologists today announced they have recently identified the wreck of the historic slave ship Trouvadore off the coast of East Caicos in the Turks and Caicos Islands. NOAA’s Office of Ocean Exploration and Research significantly funded several years of archaeological research leading to the discovery by Don Keith and Toni Carrell, from Ships of Discovery, an underwater archaeology research institute.

The Spanish vessel Trouvadore was participating in the slave trade, outlawed in the British Indies, including the Turks and Caicos Islands. In 1841, after the vessel was grounded on a reef, Caicos authorities arrested the crew, and most of the 192 African survivors settled on Grand Turk Island.

Keith and Carrell believe the African survivors of the Trouvadore are the ancestors of a large portion of current residents in the Turks and Caicos Islands. For example, traditions on the Islands have a recognizable African origin. The Turks and Caicos National Museum is recording these traditions through oral histories and is educating the community about their ancestral history.

“What makes a people different and distinct is their unique history,” said Keith, who has worked in the islands for 30 years. “The people of the Turks and Caicos have a direct line to this dramatic, historic event – it’s how so many of them ended up being there. We hope this discovery will encourage the people of the Turks and Caicos to protect and research their local history, especially the history that remains underwater.”

“Although the sinking of the Trouvadore was a major event on the Island, the story was lost to history over the following century and a half,” said Carrell. “After we uncovered records of the shipwreck several years ago, we were stunned to realize that Turks and Caicos residents had never heard of the shipwreck that brought their ancestors to the Island.”

In 2004, using historical accounts of where the Trouvadore went down, along with remote sensing and visual searches, archaeologists focused on a ship near a local landmark known as the Black Rock. Records showed the vessel had sunk at Breezy Point, approximately two miles from the Black Rock Wreck location.

“But with the wind blowing constantly from the east, and a current running from that direction, the ship would have drifted,” Keith said. “That could have happened after it was lightened by salvage, as well.” Keith and his team used careful measurements of the hull and after years of research to amass compelling circumstantial evidence, concluded in August that the Black Rock Wreck could only be the Trouvadore.

Keith and Carrell knew from the start it would be difficult to find artifacts to identify the ship. “People of these islands traditionally have used resources from sunken ships. There are houses built on Grand Turk from ship remains,” said Keith. “We knew the ship had been salvaged upon sinking, and we weren’t going to find a bell with ‘Trouvadore 1841’ on it.”

The archaeologists learned about the Trouvadore while tracing the current locations of artifacts from the Islands that were sold to museums in the U.S. and Europe over a hundred years ago. Examining records about “African idols” that were sold, they found the account of the Trouvadore wreck.

“It's rare and exciting to find a wreck of such importance that has been forgotten for so many years,” said Frank Cantelas, marine archaeologist for NOAA’s Office of Ocean Exploration and Research. “By identifying the Trouvadore, Don and Toni have really made a contribution to history and given the Islands’ people a better sense of place.”

Keith and his colleagues also discovered the wreck of the U.S. naval vessel Chippewa, lost in 1816. The researchers discovered a line of carronades, a unique type of cannon carried by the Chippewa, near the reef off Providenciales, which the vessel reportedly struck. The Chippewa and the Onkahye, sunk in 1848, were part of America’s efforts to stop the African slave trade and piracy by patrolling the Caribbean. Keith plans to continue work on the Chippewa wreck site and hopes to discover the Onkahye