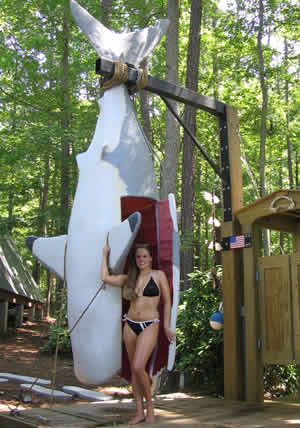 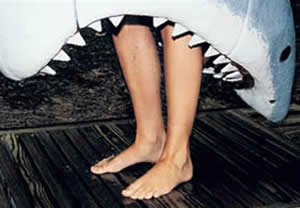 MIAMI, Florida -- For those that visit John Parker’s lake house for the first time, the experience can be jarring. After all, no one expects to see a giant shark strung up on the deck. But looking closer, the shark is not quite what it seems. It’s all part of what John claims is the first and only 'Shark Shower' in the world.

The Shark Shower is located at the Parker lake house on Lake Sinclair, 85 miles southeast of Atlanta, Georgia. John and his wife entertain a large number of guests during the summer months and often find the need for an extra shower to accommodate everyone after a hot day on the lake. Necessity, combined with inspiration from a niece fascinated by sharks, led to the idea of the shark-shaped shower.

John designed and constructed the Shark Shower himself, with a little help from his friends. The process began with a scaled-up drawing of the shark. To allow enough space inside to shower, John quickly realized the shark would have to be close to 15 feet long and 3 feet in diameter.

He constructed the frame from approximately 500 feet of steel and wire mesh. Welding turned out to be the most difficult step for John, as he had no prior experience working with metals. Not to be deterred, he went to the local pawnshop and bought an arc welder and taught himself to weld.

After the frame was built out, the Shark Shower began to take shape. John then encapsulated the frame with 30 pounds of spray polyurethane foam. The steel teeth had to be sanded down so not to hurt any ankles or legs while showering. After that, the shark was covered in fiberglass and resin. He had a friend at a local body shop spray paint the shark. At last, "K-Bite" was born, named as a tribute to his niece Karen.

As to his neighbor’s reaction to the Shark Shower, John says "the Shark Shower continues to be a hit among boaters and residents on the lake. There are boaters that motor up to us while on the dock and want to see the shark and how it all works."