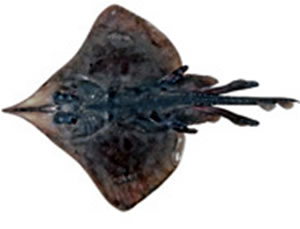 The Maugean Skate Zearaja maugeana, a new species from Bathurst and Macquarie Harbours in Tasmania. Lsted as Endangered by the IUCN Red List

CLAYTON SOUTH, Australia -- Australian scientists have completed an ambitious 18-month project to name and describe more than 100 new species of sharks and rays.

Conducted by scientists working under the auspices of CSIRO’s Wealth From Oceans National Research Flagship, the project named a third of Australia’s – and about a tenth of the world’s – shark and ray species.

“Additional taxonomic information like this is critical to managing sharks and rays, which reproduce relatively slowly and are extremely vulnerable to over-fishing and other human impacts,” he says. “Their populations are also sensitive to small-scale events and can be an indicator of environmental change.”

CSIRO’s Dr William White says sharks and rays also play a vital ecosystem role as apex predators. “Take them away and what does it mean for the rest of the ecosystem?” Dr White says. “We can’t understand possible implications unless we know what species we’re dealing with.”

The new species include:

More than 90 of the new species were identified but undescribed in the 1994 book; Sharks and Rays of Australia, by Dr Last and CSIRO’s Dr John Stevens. The new names and descriptions will feature in a revised edition of the book in 2009. Specimens of many of the new species are in the Australian National Fish Collection at CSIRO Hobart – the largest collection of preserved sharks and rays in the Southern Hemisphere.

A workshop focusing on the project’s findings will be held at Sydney’s Australian Museum on 22 September during the 2nd Annual Meeting of the Oceania Chondrichthyan Society. Involving some of the world’s leading experts in the field, the WWF-Australia-sponsored workshop also will assess priority areas of future research and management of sharks in Australian waters.