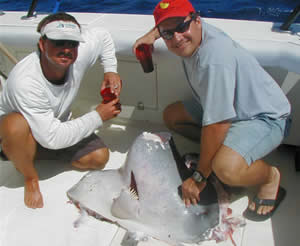 BRIDGETOWN, Barbados -- An unusual occurrence of a 30 foot killer was spotted some 15 miles Southeast of Barbados eating another whale last Saturday.

Fisherman James Peirce, who spotted the whale eating a dwarf Sperm whale, noted it was a highly unusual sight, as he had heard of only one sighting of a Killer whale in Barbadian waters.

He noted that the normal whales that would be seen around these waters are the Humpback and Sperm whales.

Peirce said, We saw the blow spouts about a mile away and headed over to them, since we get Yellowfin tuna feeding around the normal Humpback and Sperm whales we see around here. When we got there, I noticed the huge dorsal fins, approximately four to five feet tall, and realised these were Killer whales.

He added that, as he got closer, he noticed the larger of the two had a smaller grey whale of around ten feet long cross-ways in its mouth that was still alive. The two whales, he noted, proceeded to tear the smaller whale apart, but most of it occurred underwater.

Peirce said that a huge area of oil slick was spread across the sea as well as lots of blood was in the water.

We brought the head of the dead whale onboard to try to identify it, but were stunned at the time. I since believed it to be a Pygmy Sperm whale, and then threw it back over to the Killer Whales, he recalled.

Killer whales usually live amongst icebergs and are not supposed to be around Barbados.