Florida Proposes More Protection For Sharks; State 'A Pioneer And A Leader In Shark-management Efforts' 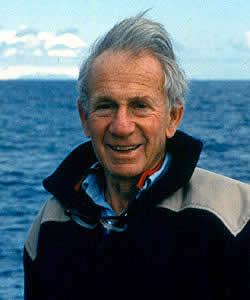 Dr. Walter Munk has been awarded the 2010 Crafoord Prize in Geosciences by the Royal Swedish Academy of Sciences

ARLINGTON, Virginia -- Hailed as one of the world's greatest oceanographers and pioneers of marine science, Dr. Walter Munk, a long-time contributor to the Office of Naval Research (ONR), received the prestigious 2010 Crafoord Prize in Geosciences from the Royal Swedish Academy of Sciences on May 11 in Stockholm.

The ceremony, attended by King Carl XVI Gustaf and Queen Silvia of Sweden, paid tribute to the career of Munk as a global leader through his work with ocean circulation, tides and waves, and their role in the Earth's dynamics.

"Dr. Munk has made incredible advances in the field of oceanography," said Rear Adm. Nevin Carr, Chief of Naval Research, who attended the ceremony.

"The research and experimental programs that Dr. Munk has been involved in for over half a century have paved the way for scientists wishing to understand the science of sound in the sea. He truly is a pioneer," Carr added.

Munk has been with the Scripps Institution of Oceanography at the University of California San Diego since 1940, where he received a doctorate degree in oceanography. He has worked with the Office of Naval Research's Ocean Battlespace Sensing Department on a number of projects related to long-range ocean acoustics, acoustic propagation and wave studies for more than 50 years.

To mark his accomplished career, ONR, in conjunction with the Oceanography Society and the Office of the Oceanographer of the Navy, founded the Walter Munk Award, which is granted each year to scientists and researchers in the oceanography field. Recipients are selected based on their significant original contributions to the understanding of physical ocean processes related to sound in the sea; significant original contributions to the application of acoustic methods to that understanding; and outstanding service that fosters research in ocean science and instrumentation. Munk was the first recipient of the award in 1993.

For the Crafoord Prize, which is on par with Nobel achievement, Munk received about $560,000 for his contributions in the pioneering of oceanography research and understanding. The Crafoord Prize fund was established in 1980 by a donation to the Royal Swedish Academy of Sciences from Holder Crafoord. It recognizes achievement in astronomy, mathematics, biosciences and geosciences.

Munk's other awards include the National Medal of Science, the Kyoto Prize in Basic Sciences, the Gold Medal of the Royal Astronomical Society and the Prince Albert I Medal in the physical sciences of the oceans.

The veteran scientist has no plans to retire any time soon. He is currently promoting a program that studies acoustic tomography underneath glaciers. Basically, Munk envisions being able to map the underside of glacier structures, a science that has yet to be fully explored.

Dr. Peter Worcester, research oceanographer at the Scripps Institute and colleague of Munk, first knew Munk as his professor in the 1970s. "Walter is an incredible human being with an impeccable work ethic," Worcester said. "In his early 90s, he is still proposing new ideas and research programs."

"The number of different fields he has worked in and contributed to throughout his career in oceanography is simply staggering," Worcester said. "He really is a one-of-a-kind individual with a drive that has earned him this award."