Cambodia: Extremely Rare Turtle Is Release To The Wild With Satellite Tag

NOAA Attempts To Charge Oceana 16k For Release Of Sea Turtle Records; 'It Is Unconscionable' 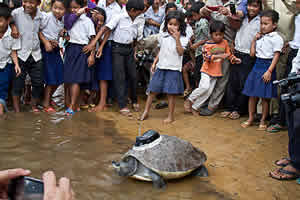 A female Souther River terrapin is released into the wild along the banks of the Sre Ambel River in Cambodia at a ceremony on Monday, January 16, 2012

NEW YORK, New York -- The Wildlife Conservation Society, in conjunction with the Cambodian Fisheries Administration and Wildlife Reserves Singapore, announced today the successful release of a Southern River terrapin (Batagur affinis) â one of the most endangered turtles on earth â into the Sre Ambel River in Cambodia.

The turtle was released on Monday, January 16th at a ceremony attended by officials, conservationists, and local people.

The female turtle, which weighs approximately 75 pounds (34 kilograms), is fixed with a satellite transmitter that will allow conservationists to track its whereabouts â the first-ever satellite monitoring study for this species.

Captured in the Sre Ambel River by local fishermen in April, 2011, the turtle is one of an estimated 200 adults remaining in the wilds of Cambodia, Malaysia, and Indonesia. It was voluntarily turned it over to the WCS Cambodia turtle team instead of being sold into the black market trade where it would have been sent to food markets in China.

The population in the Sre Ambel River is estimated at less than ten nesting females. Thus, this individual is extremely important for maintaining genetic diversity of this species that has already suffered drastic population declines.

WCS believes the population has an excellent chance of recovery as the coastal mangrove forests of Southeastern Cambodia are some of the largest and most pristine in Southeast Asia, spanning some 175 square miles (more than 45,000 hectares). These habitats are crucial to numerous aquatic and terrestrial animals and are vital nursery areas for marine fisheries.

Conservationists will monitor the turtle's movements to see how it utilizes this region. Of particular interest is how the turtle navigates through commercial fishing grounds, as well as areas where it could be threatened by other factors such as habitat destruction by sand mining or conversion of mangrove forests into shrimp farming facilities.

WCS notes that numerous studies on similar long-lived species have shown that as little as a five percent increase in annual adult mortality can cause populations to go extinct.

"By reducing the adult mortality of the Southern River terrapin, even by fractions â as little as ten animals a year per population in this circumstance â we can have immediate and long-term positive impacts on the remaining wild populations of this critically endangered species" said Brian D. Horne of the Wildlife Conservation Society.

Heng Sovannara, Deputy Director of Cambodia's Fisheries Administration's Conservation Department, is extremely hopeful that the release will enhance efforts to conserve the species. "By identifying areas that are most utilized by the turtles, we can pinpoint our efforts to reduce the turtles being caught as fishery by-catch as well as targeted hunting," he said.

Dr. Sonja Luz, Deputy Director of Conservation & Research for Wildlife Reserves Singapore, said: "This project will contribute greatly to a much brighter future for this critically endangered terrapin. Hopefully, more public awareness and education opportunities will arise from this and allow us to create better protection tools and a safer environment for these amazing reptiles."

In 2000, a small population of Southern River Terrapins, Batagur affinis, was found in the Sre Ambel after many years of being considered locally extinct. The turtle was once considered solely the property of the King of Cambodia, but has been decimated by overhunting over the past two decades.

Following the Khmer Rouge and Pol Pot regime, the Cambodian people were left in severe poverty, and with the growing international demand for turtles in China for human consumption, literally thousands of turtles were captured and sent to China for much needed income by the country's impoverished people.

The Wildlife Conservation Society saves wildlife and wild places worldwide. We do so through science, global conservation, education and the management of the world's largest system of urban wildlife parks, led by the Flagship Bronx Zoo. Together these activities change attitudes toward nature and help people imagine wildlife and humans living in harmony. WCS is committed to this mission because it is essential to the integrity of life on Earth. Visit: www.wcs.org