Researchers Reveal That Environmentally Devastating Zebra Mussels Can Be Controlled; Reproduction 'Can Be Impeded'

Researchers: Medicine Residues May Threaten Fish Reproduction; 'We Are Finding These Levels In Treated Waste Water' 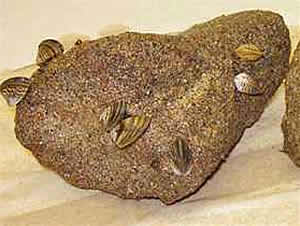 New research shows a promising example of how zebra mussel populations can be successfully controlled without damaging the natural ecosystem.

TROY, New York -- While a lone zebra mussel is relatively harmless, its appearance usually indicates the arrival of thousands of the unwanted visitors. In waterways around the globe, the mussels are outcompeting native animal species for food and clogging industrial water systems.

Scientists and municipalities in affected areas struggle with how to eradicate the mussels quickly without causing wide-scale damage to the surrounding ecosystem by using harmful pesticides or other damaging chemicals to remove the mussels. A recent zebra mussel eradication program led by scientists at Rensselaer Polytechnic Institute’s Darrin Fresh Water Institute is now providing a promising example of how zebra mussel populations can be successfully controlled without damaging the natural ecosystem.

“Conventional wisdom on zebra mussels holds that once a population is established, they are impossible to control,” said Darrin Director Sandra Nierzwicki-Bauer. “However, we have been able to show that it might be possible to remove enough mussels to reduce the population density to the point where successful reproduction can be impeded.”

The researchers looked at how a relatively low-tech approach, coupled with extensive community outreach and no small amount of volunteer elbow grease, successfully removed what is estimated to be more than 90 percent of a mussel infestation in Lake George within two months. To perform the removal at the freshwater lake, a popular tourist destination in upstate New York at the foot of the Adirondack Mountains, the researchers enlisted the assistance of volunteer SCUBA diving teams to hand remove more than 21,000 zebra mussels from the site.

The study took place from 1999, when the mussels were first discovered in Lake George by divers with underwater archaeology firm Bateaux Below, to 2007, although the removal effort continues today. The vast majority of mussels were removed during the first year of the project, from an area covering 3,900 square meters that is divided into nine dive sections. After hundreds of hours of dives, the researchers’ continued investigation and monitoring of the site for larvae suggests that the mussels have not successfully reproduced since the removal began a decade ago.

Because of the nature of the zebra mussels and their link to human activity, particularly their ability to hitch a ride on a contaminated hull or in the bilge water of a boat after a boating trip in an infested waterway, Darrin Fresh Water Institute’s surveillance of the lake has since resulted in the discovery of eight new colonies of zebra mussels. Each is being systematically removed through SCUBA dives in the same way that the initial site was cleaned.

“A critical component of this effort has been a broad-based surveillance program,” Nierzwicki-Bauer said. “This allows us to quickly mount the SCUBA-based approach while the population remains relatively small.” The Darrin Fresh Water Institute and other organizations on Lake George regularly monitor the waterway for new zebra mussel infestations.

“Perhaps ‘mission impossible’ can never be claimed in the fight against zebra mussels, but the prevention of colonization may well be possible with a long-term commitment to monitoring and rapid removal,” she said.

The research team’s findings, based on activities and study from 1999-2007, were published late this summer in the journal Aquatic Conservation: Marine and Freshwater Ecosystems. Along with Nierzwicki-Bauer, researchers contributing to the study are John Wimbush of the New York State Department of State; Marc Frischer of Skidaway Institute of Oceanography; and Joseph Zarzynski of Bateaux Below.

The Darrin Fresh Water Institute, located in Bolton Landing, N.Y., is part of Rensselaer Polytechnic Institute. For more than 35 years, the scientists and students of the institute have conducted research that has increased public awareness of environmental issues and answered important questions regarding the protection of our land, water, and air. The center provides Rensselaer students and faculty, as well as visiting scientists and elementary through high school students, the opportunity to study a variety of ecosystem and environmental problems using some of the most sophisticated technologies currently available.