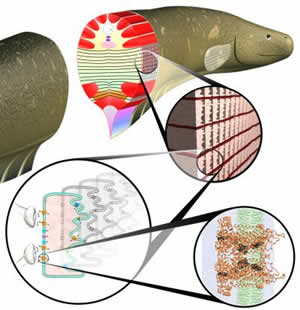 NEW HAVEN, Connecticut -- Engineers long have known that great ideas can be lifted from Mother Nature, but a new paper by researchers at Yale University and the National Institute of Standards and Technology (NIST) takes it to a cellular level. Applying modern engineering design tools to one of the basic units of life, they argue that artificial cells could be built that not only replicate the electrical behavior of electric eel cells but in fact improve on them. Artificial versions of the eel’s electricity generating cells could be developed as a power source for medical implants and other tiny devices, they say.

The paper, according to NIST engineer David LaVan, is an example of the relatively new field of systems biology. “Do we understand how a cell produces electricity well enough to design one—and to optimize that design?” he asks.

Electric eels channel the output of thousands of specialized cells called electrocytes to generate electric potentials of up to 600 volts, according to biologists. The mechanism is similar to nerve cells. The arrival of a chemical signal triggers the opening of highly selective channels in a cell membrane causing sodium ions to flow in and potassium ions to flow out. The ion swap increases the voltage across the membrane, which causes even more channels to open. Past a certain point the process becomes self-perpetuating, resulting in an electric pulse traveling through the cell. The channels then close and alternate paths open to “pump” the ions back to their initial concentrations during a “resting” state.

In all, according LaVan, there are at least seven different types of channels, each with several possible variables to tweak, such as their density in the membrane. Nerve cells, which move information rather than energy, can fire rapidly but with relatively little power. Electrocytes have a slower cycle, but deliver more power for longer periods. LaVan and partner Jian Xu developed a complex numerical model to represent the conversion of ion concentrations to electrical impulses and tested it against previously published data on electrocytes and nerve cells to verify its accuracy. Then they considered how to optimize the system to maximize power output by changing the overall mix of channel types.

Their calculations show that substantial improvements are possible. One design for an artificial cell generates more than 40 percent more energy in a single pulse than a natural electrocyte. Another would produce peak power outputs over 28 percent higher. In principle, say the authors, stacked layers of artificial cells in a cube slightly over 4 mm on a side are capable of producing continuous power output of about 300 microwatts to drive small implant devices. The individual components of such artificial cells—including a pair of artificial membranes separated by an insulated partition and ion channels that could be created by engineering proteins—already have been demonstrated by other researchers. Like the natural counterpart, the cell’s energy source would be adenosine triphosphate (ATP), synthesized from the body’s sugars and fats using tailored bacteria or mitochondria.