From The Deep: Spectacular Squid Found Off Little Cayman; 'The Best Preserved Specimen To Date' 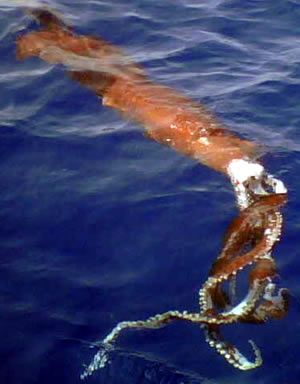 GEORGE TOWN, Cayman Islands -- A rare squid found floating on the surface of the ocean about 5 miles south of Little Cayman this weekend has been positively identifed as Asperoteuthis.

Local fisherman Derren Burlington, who was taking part in the Brac Jackpot Fishing Tournament, discovered the 24lbs 4oz creature, which is over 7 feet (2.5m) long, on Saturday 18 May at around 9:00 am, and transported it to the Little Cayman Research Centre operated by the Central Caribbean Marine Institute (CCMI).

Dr. Clyde Roper, Emeritus Zoologist at the Smithsonian Institution, has confirmed that it is only the fourth specimen known in the entire Atlantic Ocean. He said all other specimens known of this species â a dozen or so â have been found in the Indo-Pacific waters.

"This does not mean that we are suddenly being inundated by an Indo-Pacific species. It merely emphasizes something perhaps more interesting â it shows how little we know about the oceans that surround and sustain us, especially about the deep sea and its magnificent, though strange, inhabitants," said Dr. Roper.

"The recovery of the squid is a significant discovery because it is the best preserved specimen to date and the internal organs are likely to be intact. Squids in this family (Chiroteuthidae) are soft and gelatinous and are also know as whip-lash squid," said CCMI President Dr Carrie Manfrino, who also noted that the tentacles and eyes were missing from the creature.

"Scientists are examining the photographs taken, but what is clear is that the specimen...came from very deep water," said Manfrino. "This discovery is especially important because the species has only been described in general terms. This specimen will make it possible to more fully describe the species. As marine environments are under increasing stress, the lack of information about the diversity of life in the ocean is increasingly alarming," she added.

Dr Roper noted that the manuscript of a paper that describes the first three specimens known in the Atlantic currently is in press, authored by himself and two colleagues.

"Interestingly, these three specimens came from waters in the general region of the Cayman Islands in the past couple of years. Even though the specimens are incomplete, just as is the current specimen, we were able to examine and dissect them to try to determine their food habits, sex and reproductive condition, for example," he explained. "So, even less-than-perfect specimens can provide a great deal of information that contributes to a further understanding of the lives and habits of strange and wonderful creatures from the deep sea."

Jon Clamp, LCRC Station Manager, said the squid is now in the process of being preserved on Little Cayman so that it can be shipped to the US for expert analysis.