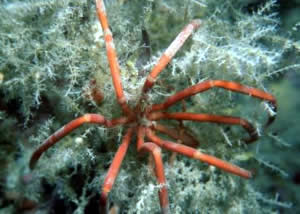 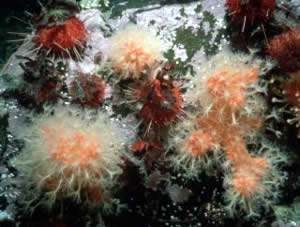 A group of sea urchins and soft corals photographed in Spring 1998 in the shallows (12m). Credit: Simon Brockington @ BAS

Antarctic worms, sea spiders, urchins and other marine creatures living in near-shore shallow habitats are regularly pounded by icebergs. New data suggests this environment along the Antarctic Peninsula is going to get hit more frequently. This is due to an increase in the number of icebergs scouring the seabed as a result of shrinking winter sea ice. The results are published this week in the journal Science.

Scientists from the British Antarctic Survey (BAS) show how the rate of iceberg scouring on the West Antarctic Peninsula seabed is affected by the duration of winter sea ice, which has dramatically declined (in space and time) in the region over the last few decades due to climate warming. This increase in iceberg disturbance on the seabed, where the majority of all Antarctic life occurs (80%), could have severe effects on the marine creatures living as deep as 500m underwater.

Lead author, Dr Dan Smale from BAS, says: "It has been suggested previously that iceberg disturbance rates may be controlled by the formation of winter sea ice, but nobody's been able to go out and measure it before. We were surprised to see how strong the relationship between the two factors is. During years with a long sea ice season of eight months or so, the disturbance rates were really low, whereas in poor sea ice years the seabed was pounded by ice for most of the year. This is because icebergs are locked into position by winter sea ice, so they are not free to get pushed around by winds and tides until they crash into the seabed."

By using grids of small concrete markers on the seabed at three different depths for five years, BAS SCUBA divers were able to determine the frequency of iceberg scour by counting the number of damaged or destroyed markers annually.

Ice disturbance has been recognised as a driving force in the structure of the Antarctic seabed animal communities. Iceberg scouring damages areas of the seabed creating space for a high diversity of animals to use. However, an increase in iceberg scour with the seabed would affect the type and number of marine creatures found on the seabed and may cause changes in the distributions of key species.