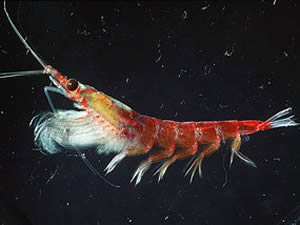 Krill is one of its most important forms of plankton. credit: Australian Antarctic Division: Steve Brooks

HOBART, Tasmania -- A 20 year study of the Southern Ocean has found significant changes in the composition, distribution and diversity of plankton and krill sampled by Australian Antarctic Division scientists.

The Division's Continuous Plankton Recorder project has been mapping and monitoring plankton populations in the Southern Ocean since 1991.

The recording equipment is towed behind a marine science ship, where it filters and catches the tiny organisms.

"Since the project began in the early 1990's there have been significant changes in the composition of plankton in our samples," Dr Hosie said.

"We seem to be catching less krill in the Plankton Recorder, this could be the result of either a decline in numbers or a change in distribution.

"If there is a permanent decline in krill abundance this may force animals that are dependent on krill, such as whales and penguins, to change their diet in order to survive," he said.

The research has also found increased numbers of smaller zooplankton in samples from the sea ice zone and sudden massive blooms of other plankton species spread over large areas.

"We are not certain what is driving this change in the Southern Ocean, but documented changes in sea-ice and ocean temperature are already affecting the Antarctic food web," he said.

The project has covered 70% of the Southern Ocean, taken 30,000 samples, identified and mapped 230 species and towed the Recorder for more than 278,000 kilometres.

The 20 year study has also produced the first Zooplankton Atlas, which documents the distribution and abundance of the 50 most common zooplankton species in the Southern Ocean.

The Atlas will serve as a reference for other Southern Ocean researchers and monitoring programs such as those run by the Commission for the Conservation of Antarctic Marine Living Resources (CCAMLR) and the developing Southern Ocean Observing System (SOOS).

The Continuous Plankton Recorder will be deployed again on the Aurora Australis on the first voyage of the Australian Antarctic season departing Hobart today.