Study Of Skates And Sharks Questions Assumptions About 'Essential' Genes 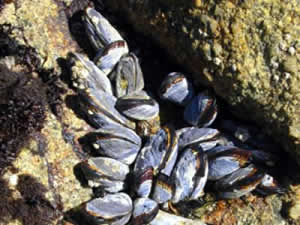 LOS ANGELES, California -- It's hard being a mussel: you have to worry about hungry starfish and even hungrier humans, not to mention an environment that can change your body temperature 50 degrees Fahrenheit in just a few hours.

"It's one of the most variable habitats on Earth," said USC biologist Andrew Gracey. "Mussels can spend part of the day bathed in cool Pacific seawater and the other part baked under the California sun."

Gracey led the first real-time molecular sampling of mussels in their natural habitat, the results of which appear online Oct. 9 in the journal Current Biology.

Scientists have thought that mussels survive their harsh home on the rocks by just being tough, but this study suggests a more sophisticated strategy.

Because their environment is so unpredictable—at low tide mussels could scorch on a sunny day and get soaked on a stormy one—these regular cycles were unexpected.

"To be honest, I first thought they'd be wasting their time to be constantly switching on this gene and switching off that gene," Gracey said.

The scientists also found that as the environment became harsher—like higher up the rocks—the oscillations in gene expression became more pronounced.

Mussels use genes to weather the heat

In addition to cyclic expression, the study found that mussels use two sets of genes to respond to heat stress—sometimes reacting to temperature changes in seconds.

"Day-in, day-out, they switch on a particular set of genes associated with routine heat stress, but when the day got very hot we saw this other battery of genes dealing with really extreme temperatures," Gracey said.

The first set of genes triggers the formation of chaperones that prevent proteins from unraveling, while the second set creates proteins that shepherd damaged material away.

This could have implications for climate change and how a key species like mussels—fundamental to the ecology of inter-tidal rocky zones—would adapt to a hotter world.

In addition, there are implications for understanding sudden summer mortality syndrome, a mysterious die-off that can devastate oyster farms, and which is believed to be linked to a stress event like heat.

Expressing genes in waves appears to be a survival strategy, one that has been seen in lab experiments involving yeast.

"There are certain physiological processes that are fairly incompatible, like respiration and cell division," Gracey explained.

Respiration creates free radicals, and if an organism undergoes cell division at the same time, those free radicals could damage DNA. (This is partly why antioxidants in green tea and pomegranates are popular these days, since they remove free radicals.)

By keeping respiration and cell division separate, mussels can decrease the chances of such cell damage—an advantage in such extreme conditions.

What controls the cycles?

In humans, the circadian rhythm is also a cycle that involves waves of gene expression, but unlike the mussel cycles, it has consistent intervals regulated by light.

"Periods are typically constant, and typically they're following something related to a 24-hour cycle," Gracey noted. "Our data doesn't conform to that."

It's not yet clear what is driving the cycles in mussels. It could be temperature, how much time is spent out of the water, or the opportunity to feed—but it's hard to pin down a single variable.

(A new grant from the National Science Foundation will help Gracey and colleagues tackle that question through lab simulations.)

Back in the lab, the DNA was sequenced and bound to 10,000 points on a "gene chip," or DNA microarray.

They then extracted RNA—the messenger that commands expression of a certain gene—from the samples at the 20 successive time points.

Thanks to the dyes, the scientists could then observe which sample from which time point bound relatively more to a specific part of the mussel genome.

When this was determined, the functions of those genes that were expressed more at that point in time could be inferred based on their similarity to genes in public databases.