Chinese treasure ship to reveal its secrets after 800 years 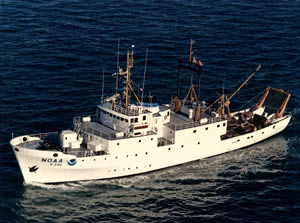 WASHINGTON, D.C. -- The NOAA research ship Albatross IV was decommissioned today, ending its distinguished 45-year career in service to the nation. The vessel sailed over 655,000 miles on 453 research cruises, primarily fisheries surveys off the northeastern coast of the United States. These surveys created the world’s longest continuous study of fish population data.

“Albatross IV is the grand old lady of the NOAA fleet,” said William J. Brennan, Ph.D., acting under secretary of commerce for oceans and atmosphere and acting NOAA administrator. “I am proud to be one of the scientific crew members that sailed aboard this vessel that contributed significantly to our extensive knowledge about important fishery stocks and the marine environment off the Northeast.”

The Albatross IV is the last of four vessels sharing the same name sailing from Woods Hole since 1883. The original Albatross was the first to be built exclusively for marine research by any government. Built in 1962, Albatross IV was the first vessel in the modern ship-building era, and continued the long scientific tradition established by the first three Albatross vessels.

“More than 2,400 people sailed aboard the Albatross IV, some working their entire careers with the vessel,” said Rear Admiral Jonathan W. Bailey, director of the NOAA Corps, one of the nation’s seven uniformed services, and director of NOAA’s Office of Marine and Aviation Operations. “We are sad to see her go, but look forward to continuing this important work with the Henry Bigelow, a ship that is as much a quantum leap forward in capability for us now, as was the Albatross IV when it entered service back in 1963.”

For most of her service life, the 187-foot Albatross IV conducted sampling and research cruises across the Northeast continental shelf in support of NOAA‘s Northeast Fisheries Science Center. Her key projects included annual spring and autumn groundfish and sea scallop trawls.

The magnitude of information collected by a ship like the Albatross IV can be overwhelming. During each cruise, fish and invertebrates are sorted on deck by species. The data about each fish, such as its sex, weight, length, and stomach contents are recorded. Oceanographic data are also collected by sensors, both shipboard and deployed. A typical fishery resource survey cruise takes about 45 sea days.

Albatross IV also was a “school” for software engineers, who developed a computerized system for fisheries data collection with scientists from NOAA’s Northeast Fisheries Science Center during the annual trawls. The ship then served as the test platform in 2001 for the automated system that signaled the end of nearly four decades of pencil and paper data recording aboard NOAA fisheries ships in the Northeast. The successful tests aboard Albatross IV led to installation of the system across the NOAA fisheries fleet.

As part of the fleet of NOAA research and survey ships and vessels, Albatross IV was operated, managed, and maintained by officers of the NOAA Corps, masters and wage mariners under NOAA’s Office of Marine and Aviation Operations. Her last captain was Master Stephen Wagner, a resident of Woods Hole, Mass.