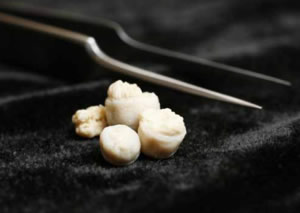 COLUMBUS, Ohio -- Researchers cruising for creatures that live in the deepest parts of the Pacific Ocean found a new species of sea anemone living in the unlikeliest of habitats -- the carcass of a dead whale.

A marine biologist would say that discovering a new sea anemone isn't so unusual. But finding one that calls a dead whale home is what sets this new creature apart.

Since the scientists who initially found these animals weren't sea anemone specialists, they sent the 10 specimens they collected to Meg Daly, an assistant professor of evolution, ecology and organismal biology at Ohio State University. Daly runs one of the very few laboratories in the world equipped to study sea anemones.

"These creatures were so cool simply because we knew that no sea anemone had ever been found on a whale fall," she said.

Once a whale dies, its carcass sinks to the bottom of the ocean. Scientists call this a "whale fall." The anemones that Daly received once lived on the bones of a dead whale some 1.8 miles (3,000 meters) below sea level in a region of the Pacific Ocean called Monterey Canyon, roughly 25 miles off the coast of Monterey, Calif. All of the specimens currently in Daly's collection came from this whale fall.

The anemone, given the scientific name Anthosactis pearseae -- there is no English name for it -- is small and white and roughly cube-shaped. It's about the size of a human molar, and even looks like a tooth with small tentacles on one side.

Daly and Luciana Gusmao, a doctoral student in Daly's laboratory, describe A. pearseae in detail in a recent issue of the Journal of Natural History. The two assigned the anemone to the genus Anthosactis primarily due to the roughly uniform length of A. pearseae's tentacles -- a characteristic common to this group of about seven sea anemones.

"We tend to differentiate Anthosactis species from other groups of sea anemones by a variety of traits, rather than any one unique attribute," Daly said.

She and Gusmao named A. pearseae after Vicki Pearse, the naturalist who first collected the specimens during a cruise of the Monterey Bay Aquarium Research Institute's research vessel the Western Flyer. Pearse is a research associate at the Institute of Marine Sciences at the University of Santa Cruz.

It's customary to name a newly discovered plant or animal species after the person who found it, or after the place where it was discovered.

Collecting deep-sea creatures is a tedious process that involves a lot of high-tech equipment like underwater video cameras attached to remotely operated vehicles (ROVs). Deep sea ROVs are also equipped with robotic arms and suction devices that are used to collect species.

"It's like a submarine that's manned from the surface," said Daly, who plans to head to Monterey Canyon later this year in hopes of finding more dead whales with A. pearseae roosting on the bones. A successful trip could answer some of Daly's lingering questions about the species itself and, more broadly, may provide clues on how human activities affect this unique, seemingly removed ecosystem.

"The thing about these communities is that they seem so ephemeral and so unplanned," Daly said. "A whale dies where it dies, and its carcass lands wherever. But these are actually some of the most stable deep sea communities."

"A better understanding of deep-sea populations may shed light on how humans drive ecological change, whether it's through whaling or global climate change," she said, and also pointed out that there are now far fewer major whale migrations along the California coast.

While the flesh of a dead whale decomposes within weeks, the bones can last anywhere from 60 to 100 years.

"As that happens, the bacteria that break down the bones release sulfur," Daly said. "A whole community of aquatic creatures uses that sulfur to make energy, much like plants convert light into energy."

Daly doesn't know much about A. pearseae beyond its physical description. She and Gusmao aren't sure how old the creatures are, and say that sea anemones can live for hundreds of years. Nor are they sure how A. pearseae reproduce (each anemone may have male and female sex organs), or if it lives exclusively on whale carcasses.

"So far, a single dead whale is the only place where we've found these anemones," Daly said.

She and Gusmao plan to include A. pearseae in a long-term evolutionary study of genetic relationships among sea anemones. A. pearseae belongs to an extremely diverse group of anemones, Daly said, and comparing the anemones' genetic sequences may clue the researchers in to how the different species evolved over time.