How Whales And Seals Evolved To Dive In The Sea: Study Uncovers The Molecular Traces Of Evolution

Study: Minke Whales Are Not Preventing Recovery Of Larger Whales; Population 'Roughly Similar' To Prior Whaling

Research: Mama Whales Teach Babies Where To Eat; 'What Are Whales Going To Do With Global Warming' 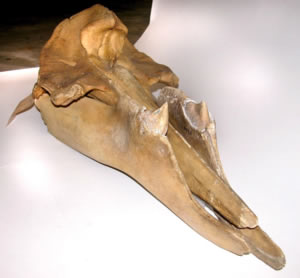 CORVALLIS, Oregon -- For years, scientists have wondered why only males of the rarely seen family of beaked whales have âtusks,â since they are squid-eaters and in many of the species, these elaborately modified teeth seem to actually interfere with feeding.

A newly published study help explain the evolutionary origin of these distinctive âtusksâ in beaked whales, a rather mysterious family of whales that live in the deep oceans. Although the tusks are known to be used in competition between males, another purpose seems to be to attract female beaked whales â and to avoid mistakes in choosing a mate.

The study, by researchers in Oregon, New Zealand and Australia, is being published this month in the journal Systematic Biology. It describes one of the first examples of âsexual selectionâ implicated in the radiation of a group of mammals outside ungulates (deer, elk and antelope).

âBeaked whales are among the least known, least understood and, frankly, most bizarre whales in the ocean,â said Scott Baker, associate director of the Marine Mammal Institute at Oregon State University and a co-author of the article. âBecause they live in the deep, they are rarely seen alive and many are described only from specimens found stranded dead on the beach. They are the only cetacean species with tusks and scientists have long wondered why, since their diet primarily is squid and the females are essentially toothless.

âIt turns out that tusks are largely an ornamental trait that became a driver in species separation,â Baker added. âThe tusks help females identify males within their species, which could otherwise be difficult as these species are quite similar to each other in shape and coloration.â

Lead author of the study was Merel Dalebout, a post-doctoral fellow from the University of New South Wales in Australia and a former Ph.D. student of Baker. The third author is Debbie Steel, also a researcher from the Marine Mammal Institute, located at OSUâs Hatfield Marine Science Center in Newport, Ore.

Many animal species develop traits that allow the males to compete with each other physically, such as antlers used for sparring by adult bull elk. Some of these have other purposes, such as the tusks of walruses that can be used for foraging as well as fighting. And some species display ornamental traits to attract mates â the coloration of the peacock, or the songs of birds.

The beaked whale is unusual in that its tusks have no obvious functional purpose other than to distinguish it from similar looking species of beaked whales.

âIn closely related species we usually see some character trait displacement or divergence, which is an important requirement to avoid mistakes in the choice of potential mates,â Baker said. âCrosses between different species can result in hybrid offspring with reduced viability or reproductive success, such as the sterile mule. In nature we expect that mechanisms have evolved to insure species recognition.

âBut mistakes happen,â Baker added. âBlue whales and fin whales are known to hybridize in the wild and there is a documented case in captivity of a hybrid offspring between a pilot whale and a bottlenose dolphin.â

Baker says speciation occurs in many terrestrial species through geographic isolation, such as separation by canyons, major river systems, or islands. In the ocean, however, these geographical barriers are largely absent. Different species of beaked whales occupy the same trophic level and can look remarkably similar â to the point where scientists can only differentiate them through DNA testing.

âInterestingly,â he said, âthe species of beaked whales that are in the same ocean regions â even âsisterâ species â are the most different in the shape of the tusks. Those that are closely related genetically but live in different oceans are the most alike.â