Researcher: Oil Remains Below Surface, Will Come Ashore In Pulses; 'It's Most Definitely There' 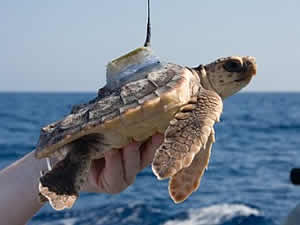 A turtle with a tracking device. credit Jim Abernethy

BOCA RATON, Florida -- Jeanette Wyneken, Ph.D., associate professor of biological science at Florida Atlantic University, and Kate Mansfield, Ph.D., a co-investigator at the University of Central Florida, are the first to successfully track neonate sea turtles in the Atlantic Ocean waters during what had previously been called their "lost years." Findings from the study appear today in the journal Proceeding of the Royal Society B.

The "lost years" refer to the time after turtles hatch and head out to sea until they are seen again upon returning to near-shore waters as large juveniles. The time at sea is often called the "lost years" because not much has been known about where the young turtles go and how they interact with their oceanic environment, until now.

With small, non-invasive, solar-powered satellite transmitters attached to the turtles' shells, Wyneken and the team were able to track 17 neonate loggerhead sea turtles for periods ranging from 27 to 220 days and for distances ranging from 124 miles to 2,672 miles.

"Prior to tagging these threatened sea turtles, all we knew about this part of their life's journey came from one turtle that had been followed for three days," Wyneken said. "From the time they leave our shores, we don't hear anything about them until they are found near the Canary Islands. Those waters are a bit like nursery school for them, as they stay for about four to eight years. There's a whole lot that happens crossing the Atlantic that we knew nothing about."

Along with Wyneken and Mansfield, Warren P. Porter, Ph.D., from the University of Wisconsin Madison, and Jiangang Luo, from the University of Miami, found that some of their results challenge previously held beliefs. While the turtles remain in oceanic waters off the Continental Shelf, the study found that little loggerhead turtles sought the surface of the water as predicted. But they do not necessarily remain within the major currents associated with the North Atlantic Subtropical Gyre. It was historically thought that loggerhead turtles hatching from Florida's east coast complete a long, developmental migration in a large circle around the Atlantic entrained in these currents. But the team's data suggest that turtles may drop out of these currents into the middle of the Atlantic or the Sargasso Sea.

The team also found that the turtles mostly stayed at the sea surface, where they were exposed to the sun's energy, and the turtles' shells registered more heat than anticipated (as recorded by sensors in the satellite tags), leading the team to consider a new hypothesis about why the turtles seek refuge in Sargassum, a type of seaweed found on the surface of the water in the deep ocean. Sargassum is a habitat long associated with young sea turtles.