Study: Seashell Loss Due To Tourism Increase May Have Global Impact; 'We Should Not Ignore This Issue'

Shark Bump Mystery Grows at Aquarium; 'It's more of an aesthetic issue than a health issue' 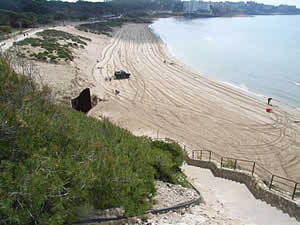 Llarga Beach in Spain has experienced a threefold increase in tourism since the 1970s and seashell numbers have decreased 60%. credit UofF

GAINSVILLE, Florida -- Global tourism has increased fourfold over the last 30 years, resulting in human-induced seashell loss that may harm natural habitats worldwide, according to a University of Florida scientist.

Appearing in the journal PLOS ONE on Jan. 8, the new study by researchers from the Florida Museum of Natural History on the UF campus and the University of Barcelona demonstrates that increased tourism on the Mediterranean coast of Spain correlated with a 70 percent decrease in mollusk shells during the tourist season in July and August and a 60 percent decrease in other months. Scientists fear shell removal could cause significant damage to natural ecosystems and organisms that rely on shells, said lead author Michal Kowalewski, the Thompson Chair of Invertebrate Paleontology at the Florida Museum.

"This research is best described as a case study that evaluates shell loss due to tourism and then explores how this process may affect natural habitats," Kowalewski said. "It's too early to tell whether this depletion is substantial enough to trigger major environmental changes. However, our results suggest that we should not ignore this issue."

In the study, researchers conducted multiple monthly surveys from 1978 to 1981 and from 2008 to 2010 on Llarga Beach, a small stretch of shoreline on the coast of Spain. Based on area hotel sales data, researchers estimate the number of tourists visiting the beach increased threefold over the last 30 years, with most visits during the summer. Over the same time period, the number of shells on the beach decreased by more than 60 percent. The survey area has experienced no new commercial fisheries or urban development since the 1970s, suggesting human activity unrelated to tourism is unlikely to have contributed substantially to the shell loss, Kowalewski said. Changes in ecosystem structure and local environmental conditions, which could potentially contribute to a natural decrease in shell numbers, were not observed, he said.

Shell removal at Llarga Beach was higher during the summer, and shells were more abundant during the winter when fewer tourists visited the area. Although a popular destination, the beach is not a major tourist hot spot, and the shells found there are not beautiful, diverse or valuable to collectors. If a relationship between increased tourism and accelerated shell removal can be detected at a place that is not famous for its shells, it is likely that beaches known for their shells and frequented by collectors have had more substantial impact, Kowalewski said.

"Although significant research has been done on the impacts of human activity on live shellfish, including, recreational harvesting and curio collecting, we are still lacking rigorous studies estimating the scale of shell removal by humans," Kowalewski said. "Shells are remarkable in that they serve multiple functions in natural ecosystems, from beach stabilization to building materials for bird nests."

Shells also provide a home or attachment surface for diverse marine organisms, including algae, seagrass, sponges and other micro- and macro-organisms. Hermit crabs use shells as their protective armor, while fish use shells to hide from predators. These discarded exoskeletons of mollusks, including clams and oysters, are also important because most are made of calcium carbonate and in many coastal habitats they dissolve slowly and recycle back into the ocean.

The study may prompt more systematic assessments of shell removal by tourists, said Geerat Vermeij, a mollusk shell expert and distinguished professor of geology with the University of California Davis who was not involved in the study.

"Molluscan shells are of prime importance to hermit crabs, and although sand beaches are not good places for such crabs, dead snail shells on mud-flats and rocky shores do form a primary resource for abundant hermit crabs," Vermeij said. "More subtly, many small organisms settle on dead shells, and so removing such shells will eliminate habitats for these colonists."

Though tourism-related shell loss may one day prove harmful, Kowalewski said more rigorous quantitative case studies are needed to fully understand the impact and develop reliable beach management practices aimed at shell protection. Some countries already recognize the negative effects of shell removal, including the Bahamas, which limits the quantity of shells tourists can export without special permits.

"Humans may play a significant role in altering habitats through activities that many would perceive as mostly harmless, such as beachcombing and seashell collecting," Kowalewski said. "It is important that we continue to investigate the more subtle aspects of tourism-related activities and their impact on shoreline habitats."