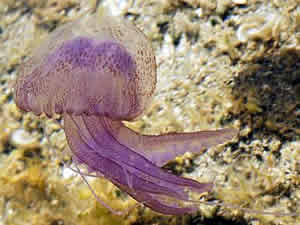 This is the jellyfish Pelagia noctiluca. Credit: Hans Hillewaert.

MADRID, Spain -- A study carried out over 50 years by an international team, with the participation of the Balearic Oceanography Centre of the Spanish Institute of Oceanography (IEO) has confirmed an increase in the size and intensity of proliferations of the jellyfish Pelagia noctiluca. There are several complex reasons for this - over-fishing and the current increase in sea water temperatures.

"Since 2002, these organisms have become increasingly frequently found in the north east Atlantic in winter, since winters have been warmer, and they have tended to appear earlier and spend more time in their annual cycle there", MarÃ­a Luz FernÃ¡ndez de Puelles, the only Spanish co-author of the study, and a researcher at the IEO's Balearic Oceanography Centre, tells SINC.

The study, which has been published in the journal Biology Letters, brings together 50 years of analysis and shows that warmer winters favour the entry of the surface current into the Mediterranean Sea past Gibraltar, creating ideal conditions for the jellyfish Pelagia noctiluca. This species proliferates along Spanish coasts, where there are more food resources than in oceanic areas.

"We have shown that they can reproduce rapidly if the conditions are right, and can reach large densities throughout the whole year, particularly if winters are warm", the marine biologist explains.

The international team used molecular methods to study the increase in the frequency of this group of cnidaria in the North Sea from 1958 to 2007, a period covering the general change in the hydro-climatic regime from cold to warm observed since 1980. "The records for the Mediterranean are much more recent and not as long or continuous, but they further strengthen the study", says FernÃ¡ndez de Puelles.

Adult Pelagia noctiluca have been recorded in various parts of the western Mediterranean, including the Balearic Islands. Their abundance was particularly striking in the autumn and winter of 2007 and in the spring of 2010, as well as in the summers.

According to existing data for the Mediterranean, these proliferations have a 12-year frequency, with most of them remaining for four years. "However, since 1998 these periods have become shorter and more frequent", explains FernÃ¡ndez de Puelles.

Consequences for fisheries and tourism

The increase in jellyfish over the course of the year "directly" affects fisheries, fish farming and tourism "because of the jellyfishes' toxic effects and the poison in their tentacles, and because they appear particularly in the summer, having a significant socioeconomic impact", says FernÃ¡ndez de Puelles.

According to the expert, the increase in the number of jellyfish and the length of time that they remain is primarily due to over-fishing, but hydroclimatic effects such as climate change and the current warming of the sea also have an impact.

Pelagia noctiluca is a jellyfish from the class of the Scyphozoa with a complex and long life cycle, a very extensive range in the warm waters of the Atlantic and Mediterranean, and which usually lives in pelagic habitats (the area of oceans closest to the surface), but also at a certain depth, which makes them difficult to study. This animal can form 'enormous blooms', which are visible from Spanish coasts and beaches.

"Jellyfish are very voracious predators at the top of the trophic network. They feed directly on fish larvae and compete with other zooplankton organisms for food, meaning that they drastically alter the trophic structure of marine ecosystems", says the scientist. "Further studies should be carried out into the impact of this", she concludes.