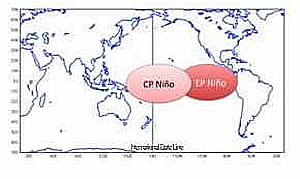 The convergence of the Central and Eastern El Nino

El Niño, the periodic eastern Pacific phenomenon credited with shielding the United States and Caribbean from severe hurricane seasons, may be overshadowed by its brother in the central Pacific due to global warming, according to an article in the September 24 issue of the journal Nature.

“There are two El Niños, or flavors of El Niño,” said Ben Kirtman, co-author of the study and professor of meteorology and physical oceanography at the University of Miami’s Rosentstiel School of Marine and Atmospheric Science. “In addition to the eastern Pacific El Niño which we know and love, a second El Niño in the central Pacific is on the increase.”

El Niño is a recurring warm water current along the equator in the Pacific Ocean that affects weather circulation patterns in the tropics. The eastern El Niño increases wind sheer in the Atlantic that may hamper the development of major hurricanes there. The central Pacific El Niño, near the International Dateline, has been blamed for worsening drought conditions in Australia and India as well as minimizing the effects of its beneficial brother to the east.

Led by Sang-Wook Yeh of the Korea Ocean Research & Development Institute, a team of scientists applied Pacific Ocean sea surface temperature data from the past 150 years to 11 global warming models developed by the Intergovernmental Panel on Climate Change. Eight of the models showed that global warming conditions will increase the incidence of the central Pacific El Niño. Over the past 20 years, according to the data, the frequency of an El Niño event in the central Pacific has increased from one out of every five to half of all El Niño occurrences.

"The results described in this paper indicate that the global impacts of El Niño may significantly change as the climate warms," said Yeh.

Though the centers of the central and eastern areas are roughly 4,100 miles apart, El Niños historically have not simultaneously occurred in both places. An increase in central Pacific El Niño events may reduce the hurricane-shielding effects of the eastern Pacific event.

“Currently, we are in the middle of a developing eastern Pacific El Niño event,” said Kirtman, “which is part of why we’re experiencing such a mild hurricane season in the Atlantic. We also anticipate the southern United States to have a fairly wet winter, and the northeast may be dry and warm.”

Kirtman expects the current El Niño event to end next spring, perhaps followed by a La Niña, which he expects may bode for a more intense Atlantic hurricane season in 2010.

Growing up in southern California, Kirtman frequently had to man the sump pump in his family’s basement during the rainy season, which he learned later was caused by El Niño.

“We’re finally learning about how ocean current flows and increases in sea surface temperature influence weather patterns, which affect every one of us, including the kid manning the sump pump,” he said. “I have devoted much of my career to studying El Niño because of how it affects people and their lives.”

“We provide them with the forecasts,” he said, “and the countries use the results to develop their response.”