Chalk One Up For Coccolithophores; Algae Builds Thicker Walls To Fend Off Ocean Acidification 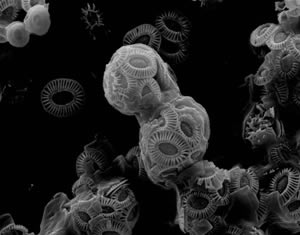 Single-cell coccolilthophores – clad in their Frisbee-like plates – sometimes chain themselves together as in this image. Credit: Science

SEATTLE, Washington -- Scientists have feared that gradual acidification of the world's oceans would wreak havoc with organisms that build protective outer shells. But a new finding shows at least three species of coccolithophores -- single-celled algae that are major players in the ocean's cycling of carbon -- are responding to ocean acidification by building thicker cell walls and plates of chalk, contrary to what some recent lab experiments have shown.

The difference resulted from conducting experiments that better mimic actual ocean conditions when carbon dioxide from the atmosphere dissolves in seawater, scientists report in the April 18 issue of the journal Science.

Excess carbon dioxide absorbed into the ocean causes acidification, which not only changes the acidity but can change the chemical mix in the water such that corals and other organisms can't get enough calcium carbonate -- or chalk -- needed to build and maintain shells or skeletons, according to Eric Rehm, a graduate research assistant with the University of Washington's Applied Physics Laboratory and a co-author on the paper. UW oceanography professor Ginger Armbrust also is a co-author.

Some think ocean acidification could kill, for example, many of the world's coral reefs by the end of the century.

But the same does not appear to be true for coccolithophores. The scientists reporting in Science compared the remains of some coccolithophores locked into sediments going back to 1780, the start of the Industrial Revolution, and found that those species today produce 40 percent more calcium carbonate in their cells and plates.

"We ought to rightly have concerns about corals and other organisms being affected by ocean acidification, but this bodes well for coccolithophores -- for now," Rehm says.

Coccolithophores are found around the world, including in Puget Sound. They are unlike any other plant in the ocean because they adorn themselves with plates that some say resemble hubcaps or Frisbees. A coccolithophores can have a few or as many as 100 of these plates. Although tiny, there are times when coccolithophores are so highly concentrated that their protective armor causes wide swaths of ocean to look aqua blue when seen from outer space.

Their mighty numbers make them an important part of the marine food web and of the carbon cycle in the oceans, in part because they take up so much carbon in the upper layer of the oceans and, when they die, their skeletons sink and carry carbon to the seafloor, where it gets locked into the sediments.

"This work contradicts previous findings and shows, for the first time, that calcification by phytoplankton could double by the end of this century," says lead author Debora Iglesias-Rodriguez of the National Oceanography Centre, Southampton, England. "This is important because the majority of ocean calcification is carried out by coccolithophores such as Emiliania huxleyi, and the amount of calcium carbonate produced at the ocean surface is known to have a direct influence on levels of atmospheric carbon dioxide."

Assessing the amount of calcification done by hundreds of thousands of coccolithophores grown in the experiments was the job of the UW researchers using flow through cytometery and techniques refined by Peter von Dassow while a post-doctoral researcher in Armbrust's group. He's now at France's Station Biologique de Roscoff and also a co-author on the paper.

A second group of researchers on the paper, led by Paul Halloran, doctoral student at the University of Oxford, took cores from sediments in the North Atlantic and found that two dominant coccolithophores species had increased in size in the 220 years since the Industrial Revolution, when humans began turning more and more to fossilized fuels for energy

"Our research has also revealed that, over the past 220 years, coccolithophores have increased the mass of calcium carbonate they each produce by around 40 percent," Halloran says.

Just what ocean acidification means for other marine calcifiers such as corals, clams and oysters is unknown. Coccolithophores are unusual among such calcifiers because they calcify, or produce, their plates inside themselves and then push the plates to their exteriors, Rehm says. That would be a different process from corals or clams trying to grow their protective coverings while exposed to acidic ocean conditions. It's also unclear what the response of natural communities and ecosystems as a whole will be to increasing ocean acidification.

Funding for the UW work came from Armbrust's Betty and Gordon Moore Foundation Marine Microbiology Investigator Award. In the United Kingdom, funding came from the Royal Society and the Natural Environmental Research Council.