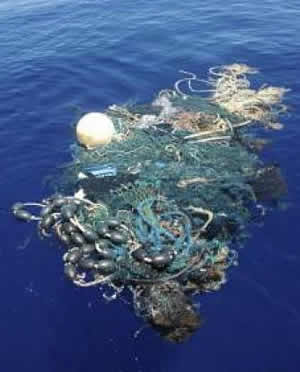 On the Scripps Environmental Accumulation of Plastic Expedition (SEAPLEX), researchers got the first detailed view of plastic debris floating in a remote ocean region.

It wasn't a pretty sight.

The Scripps research vessel (R/V) New Horizon left its San Diego homeport on August 2, 2009, for the North Pacific Ocean Gyre, located some 1,000 miles off California's coast, and returned on August 21, 2009.

Scientists surveyed plastic distribution and abundance, taking samples for analysis in the lab and assessing the impacts of debris on marine life.

Before this research, little was known about the size of the "garbage patch" and the threats it poses to marine life and the gyre's biological environment.

The expedition was led by a team of Scripps Institution of Oceanography (SIO) graduate students, with support from University of California Ship Funds, the National Science Foundation (NSF) and Project Kaisei.

"SEAPLEX was an important education experience for the graduate students, and contributed to a better understanding of an important problem in the oceans," said Linda Goad, program director in NSF's Division of Ocean Sciences. "We hope that SEAPLEX will result in increased awareness of a growing issue."

After transiting for six days aboard the research vessel, the researchers reached their first intensive sampling site on August 9th.

"We targeted the highest plastic-containing areas so we could begin to understand the scope of the problem," said Miriam Goldstein of SIO, chief scientist of the expedition. "We also studied everything from phytoplankton to zooplankton to small midwater fish."

The scientists found that at numerous areas in the gyre, flecks of plastic were abundant and easily spotted against the deep blue seawater.

Among the assortment of items retrieved were plastic bottles with a variety of biological inhabitants. The scientists also collected jellyfish called by-the-wind sailors (Velella velella).

The next day, Pete Davison, an SIO graduate student studying mid-water fish, collected several species in the gyre, including the pearleye (Benthalbella dentata), a predatory fish with eyes that look upward so it can see prey swimming above, and lanternfish (Tarletonbeania crenularis), which migrate from as deep as 700 meters down to the ocean surface each day.

By the end of the expedition, the researchers were intrigued by the gyre, but had seen their fill of its trash.

"Finding so much plastic there was shocking," said Goldstein. "How could there be this much plastic floating in a random patch of ocean--a thousand miles from land?"