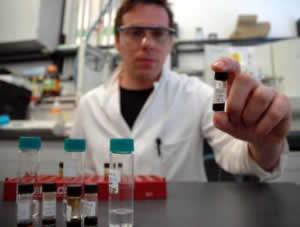 BREMEN, Germany -- Biogeoscientists show evidence of 90 billion tons of microbial organisms—expressed in terms of carbon mass—living in the deep biosphere, in a research article published online by Nature, July 20, 2008. This tonnage corresponds to about one-tenth of the amount of carbon stored globally in tropical rainforests. The authors: Kai-Uwe Hinrichs and Julius Lipp of the Center for Marine Environmental Sciences (MARUM) at University of Bremen, Germany; and Fumio Inagaki and Yuki Morono of the Kochi Institute for Core Sample Research at the Japan Agency for Marine-Earth Science and Technology (JAMSTEC) concluded that about 87 percent of the deep biosphere consists of Archaea.

This finding is in stark contrast to previous reports, which suggest that Bacteria dominate the subseafloor ecosystem. To reach this conclusion, the researchers investigated sediment cores collected from several hundred meters beneath the seafloor of the Atlantic and Pacific Oceans and the Black Sea. The cored sediments included samples that were the result of research expeditions conducted by the Integrated Ocean Drilling Program (IODP).

According to co-author Prof. Kai-Uwe Hinrichs, a biogeochemist who led the research team, two main objectives were pursued: "We wanted to find out which microorganisms can be found in the seafloor, and how many of them are living down there."

For a long time, scientists believed that extreme conditions such as high pressure, lack of oxygen, and low supply of nutrients and energy would make deep, subseafloor environments inhabitable for any life form. Nonetheless, sea-going investigations have proven the existence of the deep biosphere.

"In general, life below the seafloor is dominated by minute monocellular organisms," explains co-author Julius Lipp, who has just completed his PhD on the subject. "According to our analyses, Bacteria dominate the upper 10 centimeters of the seafloor. Below this level Archaea appear to take over the major fraction of the biomass pool." According to Lipp, Archaea make up at least 87 percent of organisms that colonize the deep biosphere. "These subsurface Archaea can be viewed as starvelings," he continues. "Compared to Bacteria, Archaea appear to be better adapted to the extreme, chronic deficiency of energy that characterizes this habitat – a consequence of the only food being fossil remnants of plants that were pre-digested by generations of other microorganisms."

Next to Bacteria, Archaea represent a distinct domain in the three-domain system of life. Both groups can be identified by fat-like molecules, so-called lipids that make up their cell membranes. To date, estimations of the deep biosphere biomass range from about 60 to 300 billion tons of carbon. Says Prof. Hinrichs, "Our measurements, determined by entirely independent means, are right in this bracket." The authors assume that about 200 million cubic kilometers of mud below the ocean floor are inhabited by microorganisms—a volume that roughly corresponds to a 600 kilometer-long cube.

Drs. Inagaki and Morono, both geomicrobiologists, studied DNA in this project. "Given the strong indication of the Archaea world in the marine subsurface," says Dr. Inagaki, "we intend to study their lifestyle and metabolism, strategy for long-term survival, and ecological roles using subseafloor materials cored by CHIKYU and other drilling platforms." CHIKYU is the world's only riser-equipped research vessel, one of three drilling platforms supported by IODP.

Because all current techniques used to detect biomass in the deep biosphere arrive at different conclusions regarding quantity and composition, Prof. Hinrichs has initiated an international "ring experiment." Currently, he and colleagues in German, European, U.S., and Japanese laboratories investigate standardized sediment samples from the seafloor using varied methods. To gain a more reliable picture of life in the deep biosphere they need to find out whether identical methods applied in different labs lead to dissimilar results. In September, the researchers involved in the ring experiment will present and discuss their findings. The participants hope "this experiment will shed a bit more light on the dark, deep biosphere," says Prof. Hinrichs.