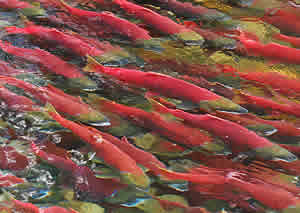 Populations of Fraser River sockeye salmon are so fine-tuned to their environment that any further environmental changes caused by climate change could lead to the disappearance of some populations, while others may be less affected, says a new study by University of British Columbia scientists.

The Fraser River is the longest river in British Columbia, flowing more than 2,000 kilometers through the province. It is known for its large salmon runs, where typically several million sockeye salmon return to the river to spawn each year. There are more than 100 distinct populations of sockeye salmon in the Fraser River watershed and to spawn, each population completes a unique migration route that varies in distance, elevation gain, river temperature and river flow.

For their study, published today as the cover article in the journal Science, UBC researchers studied eight populations of adult Fraser River sockeye and found that populations with the most difficult migrations were more athletic, displaying superior swimming ability and specialized heart adaptations. They also found that the optimal water temperature for a population, or temperature where the fish performed the best, matched the historical river temperatures encountered by each population on its migration routes.

"This is the first large-scale study on wild fish to show how different populations of the same species have adapted to such specific migration conditions," says Erika Eliason, a PhD candidate in the Department of Zoology at UBC and lead author of the study. "As climate change alters the conditions of the Fraser River watershed, our concern is that some populations may not be able to adapt to these changes quickly enough to survive."

Eliason, who worked on this study with co-authors Tony Farrell, a professor in the Department of Zoology at UBC, and Scott Hinch, a professor in the Faculty of Forestry at UBC, says this research is important to conservation efforts for Fraser River sockeye and may inform efforts to conserve biodiversity of fish in other watersheds worldwide.

Sockeye salmon have been in decline since the early 1990s. Contributing to this has been massive migration mortalities where between 40 and 95 per cent of some salmon populations have died en route to spawning.

The Fraser River has warmed by nearly 2ºC since the 1950s, with the last 20 years being some of the warmest on record. High river temperatures have been associated with the high mortality.

"I like to call the Chilko population of sockeye 'Superfish,'" says Eliason. "Chilko were able to swim at higher and a broader range of temperatures compared to the other populations we examined. We believe it has to do with how they've adapted to cope with their difficult migration."

The Chilko population must travel more than 650 kilometers upstream, gain one kilometer of elevation, go through Hell's Gate, an area where the Fraser River plunges into a passage only 35 meters wide, and travel during the highest summer temperatures to get to a glacial lake, where they spawn.

To measure the swimming ability of the salmon populations, Eliason and her colleagues monitored the metabolic and heart rates of adult salmon from each of the eight populations as they ran them through a "fish treadmill" – a tunnel capable of producing varying water speeds and temperatures.

In water temperatures above their optimal temperature, the salmon's swimming ability declined. "We propose that this is due to a collapse of the cardiovascular system," says Eliason.

"Currently, the Fraser River's peak river temperatures during the summer months exceeds the optimal temperatures for every population we examined and temperatures are near lethal for some populations."

"As we move forward, we need to examine how populations may adapt to changing environments and identify which are the least resilient to continued climate warming as these populations may require the most protection," says Eliason.

For this study, Eliason and her UBC colleagues collaborated with scientists from the Canadian Department of Fisheries and Oceans. This research was funded by the Natural Science and Engineering Research Council of Canada and the Pacific Salmon Forum.