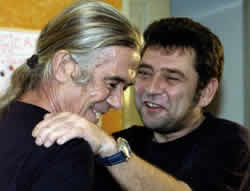 JAKARTA, Indonesia -- Police have released German and French divers accused of looting Indonesian shipwreck after their employers promised to pay Rp 700 million (US$77,777.78) bond should they run away or destroy evidence.

Lawyer of the two divers Yudhistira said that his clients were released on Wednesday evening after executives of PT PPS, which hired the divers, guaranteed that their employees would not leavethe capital.

"If the two go away or destroy the evidence then they have to pay Rp 700 million. My clients are required to report to police twice a week," he told The Jakarta Post.

Frenchman Jean-Paul Blancan and Fred Dobberphul of German national were arrested on March 8. They were accused of illegally salvaging thousands of treasures from a 10th-century wreck in Java sea some 70 miles off Cirebon, West Java.

The French government demanded earlier that Indonesia immediately release Blancan, summoning the Indonesian ambassador in Paris to voice its protest over the detention, which it described as arbitrary.

"If you know that you are 100 percent innocent and you are treated like a criminal, it's hard," said Dobberphul.

Several government agencies -- Maritime and Fishery Ministry, National Education Ministry and Culture and Tourism Ministry -- have also protested the arrest and the seizure of treasure. THey said that the expedition had obtained permits.