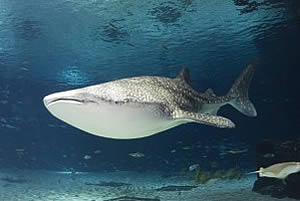 New research provides evidence that a suite of techniques called “metabolomics” can be used to determine the health status of whale sharks.

New research from Georgia Aquarium and Georgia Institute of Technology provides evidence that a suite of techniques called "metabolomics" can be used to determine the health status of whale sharks (Rhincodon typus), the world's largest fish species. The study, led by Dr. Alistair Dove, Director of Research & Conservation at Georgia Aquarium and an adjunct professor at Georgia Tech, found that the major difference between healthy and unhealthy sharks was the concentration of homarine in their in serum—indicating that homarine is a useful biomarker of health status for the species.

The paper, "Biomarkers of whale shark health: a metabolomic approach", which is published in the journal PLOS ONE, is especially significant to the veterinary science community because the study documents the results of a rare opportunity to collect and analyze blood from whale sharks. The paper also comprises the only work yet carried out on biochemistry of the world's largest fish.

"This research and its resulting findings are vitally important to ensuring Georgia Aquarium's and the scientific community's care, knowledge, and understanding of not only whale sharks, but similar species of sharks and rays," said Dr. Greg Bossart, Senior Vice President of Animal Health, Research & Conservation and Chief Veterinary Officer at Georgia Aquarium. "The publishing of this clinical research provides a greater opportunity for scientists and Zoological professionals to understand the Animals in our care and can be used to help wild populations, which puts us ahead of the curve in the integrated understanding of animal biology." Previous research and observations showed that traditional veterinary blood chemistry tests were not as useful with whale sharks; most likely because such tests are designed for mammals and comparatively less is known about shark and ray blood. Dr. Dove and six colleagues from Georgia Tech set out to significantly increase knowledge of whale shark biochemistry by examining the metabolite composition of all six whale sharks which have been cared for at Georgia Aquarium. By using metabolomics, the researchers were able to determine which chemical compounds were present in the shark blood, without knowing ahead of time what they are.

"It is vitally important for us to continue to learn how to best support the whale sharks in our care," said Dove, who, along with the GA Tech team, spent three years developing the research. "We began the study by asking ourselves, 'What should we be looking for in whale shark serum?' and 'What compounds in serum might best indicate the health status of whale sharks?'"

Not only did the study determine that metabolic profiles of unhealthy whale sharks were markedly different than those of healthy sharks in general and particularly the different levels of homarine, but the research team also identified more than 25 other compounds that differed in concentration based on the health of the individual.

Findings detailed in "Biomarkers of whale shark health: a metabolomic approach" will help scientists and veterinarians to better understand the biology of whale sharks in their natural setting, and by homology, the biology of other shark and ray species that may be similar.

Further, data compiled in the research will provide a reference library about whale shark biochemistry that can be consulted in future studies and importantly, adds new knowledge that will be useful to those who care for sharks and rays on a daily basis.

"This sort of advanced research is only made possible through collaboration between aquarium scientists and experts at our partner universities," said Dr. Dove.

For more information about this research, visit www.georgiaaquarium.org