Research: Big-clawed Crayfish Win Fights By Cheating; 'Size Was Not An Accurate Indicator Of Strength' 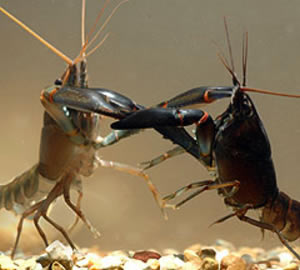 QUEENSLAND, Australia -- A study conducted at UQ's Moreton Bay Research Station has found, when it comes to crayfish, size really does matter.

"What we found was that many of the crayfish were winning fights through intimidation alone, and were actually weak-clawed individuals," he said.

By testing the muscle force of the male crayfish, Dr Wilson and his colleagues found claw size was not an accurate indicator of claw strength.

Given that dishonesty is not commonly seen in animals, the results were particularly surprising.

"The roar of a lion, the bark of a dog, or even the fairing fins of a male Siamese fighting fish are all signals between competing individuals," Dr Wilson said.

"These signals are expected, by theory, to be an honest indicator of how strong that individual is and how it could inflict injuries on opponents.

"We found that dishonest signals can occur and in very high frequencies in nature, which is very cool and very surprising."

Cheating crayfish did pay some price for their dishonesty, however - their large claws proved cumbersome when trying to swim away from predators.

"Whether they are strong or weak, all crayfish with larger claws must pay this extra cost," Dr Wilson said.

The research was published recently in the Journal of Experimental Biology.