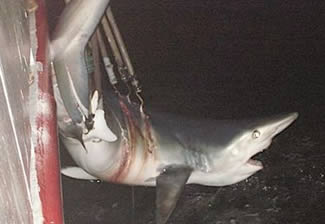 LYNN, New Jersey -- Kener Batista may have hooked a record-setting blue shark this weekend 50 miles off the coast of Lynn, but the world will never know. That's because the 10 foot 11 inch shark has already been cleaned and carved into enough steaks to feed him and his family for months.

The 24-year-old carpenter from Everett caught the beast after a 45 minute battle early Monday morning aboard the American Classic, a 100-foot fishing charter that had motored out to Wildcat Knoll for an overnight tuna and shark hunt. Batista snagged the "bluedog" some 16 hours before the ship was scheduled to return to shore, so the crew bled and gutted the shark to preserve the meat.

"It could have actually broken our state record," said Greg Skomal, the state's shark expert for the Division of Marine Fisheries.

Fish must be weighed whole on a certified scale -- before being gutted -- to qualify for a state or world record. After the crew of the American Classic cleaned Batista’s catch, the fish still weighed 424 pounds, 30 pounds shy of a record, according to Jim Walsh, the ship's captain. (Walsh had to use a device hunters use to weigh bears because his fish scale only goes to 100 pounds.)

Inside the shark's gullet, the crew found two large pollacks and another shark. That sizable dinner could have "easily added another 40 to 50 pounds" and put Batista up over the state record of 454 pounds, Skomal said.

While dwarfed by thousand-pound white and mako sharks, blues can still grow into tremendous beasts, Skomal said. The current International Game Fish Association world record dates to 2001, when an angler reeled in a 528 pound blue shark off Montauk, New York.

For those aboard the American Classic this weekend, however, Batista's shark seemed like a record setter. It took three "brawny guys," five gaffs or harpoon-like polls, and lasso looped around the shark’s mighty tale to lug the fish out of the water.

Batista and three friends each paid $125 for the overnight trip and came home to celebrate their trophy catch. When the ship returned to its dock in Lynn, there were cameras and a waiting crowd of on-lookers.

"They drove it around like it was the end of the soccer season and they won the cup," said Walsh, whose family charter business is named Walsh's Deep Sea Fishing.

After splitting the meat with his fishing mates, Batista deep fried a few shark fillets using a recipe from his native Brazil that included wine and rice.

"It's all in the freezer right now," said Batista, estimating that the meat would keep him, his wife, and his 1-year-old son fed for several months.

Then again, the soft, fishy meat may last a little longer than he anticipated.