Philippines Authorities Check Report of New Oil Slick; 'It's Not a Threat' 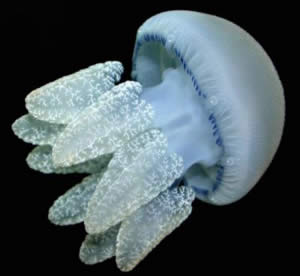 The numbers of jellyfish, like this Catostylus, appear to be on the increase due to pollution, overfishing and climate change. credit Lisa Gershwin

"Dense jellyfish aggregations can be a natural feature of healthy ocean ecosystems, but a clear picture is now emerging of more severe and frequent jellyfish outbreaks worldwide," Dr Richardson says.

"In recent years, jellyfish blooms have been recorded in the Mediterranean, the Gulf of Mexico, the Black and Caspian Seas, the Northeast US coast, and particularly in Far East coastal waters.

"The most dramatic have been the outbreaks in the Sea of Japan involving the gargantuan Nomura jellyfish which can grow up to 2 m in diameter and weigh 200 kg."

The new research, by Dr Richardson and colleagues at the University of Miami, Swansea University and the University of the Western Cape, has been published in the international journal; Trends in Ecology and Evolution, in time for World Oceans Day on 8 June.

"Fish normally keep jellyfish in check through competition and predation but overfishing can destroy that balance," Dr Richardson says. "For example, off Namibia intense fishing has decimated sardine stocks and jellyfish have replaced them as the dominant species."

"We need to start managing the marine environment in a holistic and precautionary way to prevent more examples of what could be termed a 'jellyfish joyride'."