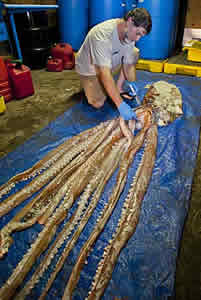 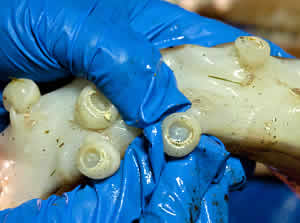 Tenticle detail of the giant squid found off the Florida coast by a fisherman. Credit UF

Full length picture of the giant squid found off the Florida coast by a fisherman. Credit UF 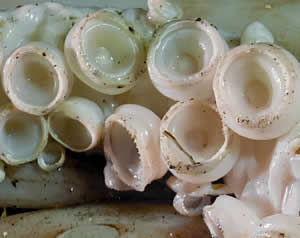 Detail of the suction cup of the giant squid found off the Florida coast by a fisherman. Credit UF

University of Florida researchers received a rare 25-foot-long, deep-water giant squid Monday, the only one of its kind in the collections of the Florida Museum of Natural History.

Recovered by recreational fishermen who found the creature floating on the surface about 12 miles offshore from Jensen Beach Sunday, museum scientists collected the specimen from the Florida Fish and Wildlife Conservation Commission Tequesta Field Laboratory in Palm Beach County and returned to the Gainesville campus late Monday.

"It's so rare to get these specimens and they're such deep-water animals that we don't know much about how they live," said John Slapcinsky, Florida Museum malacology collection manager. "This specimen provides an excellent opportunity to learn things about these creatures we couldn't find out any other way."

Robert Benz, who was fishing with friends Joey Asaro and Paul Peroulakis, said they spotted the giant squid, Architeuthis dux, about 11 a.m. After realizing what it was, the men slid the dying squid onto the back of their 23-foot boat.

"I thought we definitely need to bring it in, because no one's going to believe us if we don't," Benz said. "I didn't want to leave it out there and just let the sharks eat it."

Giant squid only reproduce once in their lifetime, and then often die slowly, after becoming lethargic, Slapcinsky said. The animal was likely in that state when the fishermen found it, he believes, because it was barely alive and near the surface in 170 feet of water.

Giant squid are one of the largest invertebrates, growing up to 60 feet long and weighing more than 1,000 pounds, but because they are seldom seen, little is known about their reproduction, ecology and life span. Depicted as sea monsters throughout history, squid are normally deep-water dwellers and some are known to spar with sperm whales, a common predator, Slapcinsky said.

"This is a pretty massive animal," he said. "It took about six people to move it, and it wasn't light."

The animal is white with red skin containing chromatophores, or color-bearing cells. Squid can activate these pigment cells, rapidly changing their color and color intensity for communication and in some species camouflage, Slapcinsky said.

The specimen is from the same genus as the giant squid depicted in the Florida Museum's 2006 temporary exhibit, "In Search of Giant Squid." The exhibit produced by the Smithsonian Institution focused on the fact the creature had never been witnessed alive in its natural habitat ā€" a feat later accomplished by a Japanese film crew.

Florida Fish and Wildlife Conservation Commission scientists extracted genetic samples from the squid, which were brought with the specimen to UF. Scientists injected formalin into the body cavity before submerging the squid in a 10 percent solution of the preservative.

"It looks nice, it's still in fabulous shape and it's big," Slapcinsky said. "It would be really cool to exhibit something like this, if it turns out that it preserves well enough and we can find a way to exhibit it so that it doesn't damage the specimen."

It will take about two weeks to complete the preservation process, after which researchers will further examine the squid to determine its sex and age and compare it with other specimens. Scientists hope to gain a greater understanding of the life of these elusive creatures, including their range, diet and how they reproduce.

The genetic data will be of particular interest to researchers trying to determine if there are one or more species of giant squid, said museum invertebrate paleontologist Roger Portell.

"We don't really have a good handle on the biogeography of these critters, so this will add to that knowledge base," Portell said. "Because they are so rare, we have so few samples where we get a fresh specimen and can actually do genetic work."