Study: Warm Ocean Currents Cause Majority Of Ice Loss From Antarctica; 'We See A Clear Pattern' 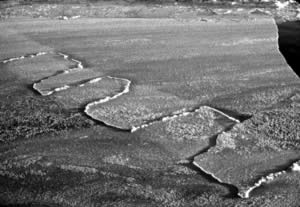 NEW HAVEN, Connecticut -- A study reported in Physical Review Letters demonstrates how ice sheets sometimes interlace when they meet, rather than riding over or under each other, and discusses the implications for other phenomena from plate tectonics of the Earth's surface to the design of self-assembling nanostructures.

"A surprising pattern, much like the meshed teeth of a zipper, is frequently seen when floating ice sheets collide," said John Wettlaufer, professor of geology & geophysics and of physics at Yale. He and his colleague Dominic Vella of Cambridge University in England demonstrated the underlying principle for the observation. Further, they suggest that the process can work for any materials that share particular physical characteristics of thickness and flexibility.

"When two elastic sheets floating on a liquid collide, intuition leads us to expect one of two results — one sheet might be 'subducted' under the other, as we observe with the earth's crust, or the two might crush each other forming a field of rubble, as we observe in thick ice floes," said Wettlaufer.

The researchers describe a third possibility in their study published in Physical Review Letters. They show that sheets of ice, or in their experiments, sheets of wax, form a series of interlocking blocks -– termed "finger rafting" — that alternately ride over and under one another. It is a curiosity that has vexed scientists for over 50 years.

The natural patterns look like meter-wide rectangular zigzags, and only occur when both sheets of ice are roughly the same thickness. Their theoretical analysis was confirmed experimentally using flexible layers of wax on water to simulate the phenomenon. They demonstrated the relationship between the width of the resulting fingers and the material's mechanical properties.

"We show that this striking observation is a general and robust mechanical phenomenon that we can reproduce in the laboratory with floating materials other than ice," he said. "Our experimental results were consistent with the field observations."

According to Wettlaufer, the findings are relevant for a host of physical systems and, "The same principles might be used for designing nanomachine gears from appropriate materials." He points out that Tuzo Wilson, one of the founders of the theory of plate tectonics, was inspired by the resemblance of structures on floating polar ice sheets to the transform faults and other features of the Earth's moving plates.