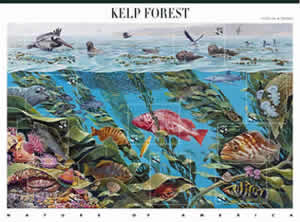 The underwater unveiling airs live on streaming video from the Monterey Bay Aquarium's Kelp Forest Exhibit on October 1 at 8:30 a.m. PT when all 25 million stamps and stamped postal cards go on sale nationwide.

Ten years ago the Postal Service began a new series dedicated to the unique ecosystems across our nation. The Kelp Forest set -- the 11th in our Nature of America series -- not only highlights the complexity of the kelp forest as an ecosystem, but also captures the incredible beauty of this remarkable undersea wonderland."

"We are excited that the United States Postal Service is highlighting this important ecosystem in its collectible stamp series," said Hekkers. "It is meaningful to unveil it in October, which marks the Monterey Bay Aquarium's 25th anniversary, and in our signature Kelp Forest exhibit, as our mission is to inspire conservation of the oceans."

To illustrate the biodiversity of a kelp forest, Dawson depicted 27 species in his colorful acrylic painting. The scene itself is imaginary as a dense grouping of creatures was necessary to illustrate as many species as possible on the stamp sheet. Even so, all of the species could be encountered at or near the Monterey Bay National Marine Sanctuary, the area featured on the pane. All of the species and their interactions are appropriate and were recommended by scientists. A description of the kelp forest and a numbered key to the artwork appear on the back of the stamp pane, along with a corresponding list of common and scientific names for 27 selected species

Customers have 60 days to obtain the first-day-of-issue postmark by mail. They may purchase new stamps at their local Post Office, or at the Postal Store website at www.usps.com/shop, or by calling 800-STAMP-24. They should affix the stamps to envelopes of their choice, address the envelopes, to themselves or others, and place them in a larger envelope addressed to:

After applying the first-day-of-issue postmark, the Postal Service will return the envelopes through the mail. There is no charge for the postmark. All orders must be postmarked by Dec. 2, 2009.