Progress On Vaccine For 'Ich,' Bane Of Fish Farms And Home Aquarium Hobbyists; 'Just One Treatment' 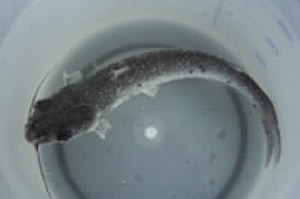 "Outbreaks of the parasitic disease caused by Ichthyophthirius (Ich) can result in losses of 50-100 percent of fish," Dehai Xu, Ph.D., said in presenting the results. "The disease is very common, and almost every home fish hobbyist has encountered it. Once the parasite infects fish, and starts growing in the skin, fins, and gills, there is no really effective treatment. Ich causes losses estimated at $50 million annually. It would be much better to prevent the disease."

As an indication of the difficulty in treating Ich outbreaks, Xu used the example of an infection that strikes a commercial fish farming pond, which might have a surface area equal to 10 or 20 high school football fields. The typical treatment involves pouring in a solution of formaldehyde, a potentially toxic substance. Hundreds of gallons might be needed, and farmers might have to repeat the treatment several times. Even after treatment, the fish would be at risk of reinfection if they encountered the parasite again, he said.

"To vaccinate against Ich, you would need much less medication, and it would not pose an apparent threat to the environment," Xu pointed out. "And you would need just one treatment to make the fish immune for life."

Xu explained that efforts to develop an Ich vaccine have focused on use of so-called "trophonts," which are the infective stage of the Ich parasite's life cycle. Trophonts burrow into a fish's skin, fins, and gills, causing the white skin spots characteristic of the disease. Those efforts have been hindered, however, by gaps in scientific knowledge about how fish develop protective immunity to trophonts. Xu and colleagues, Drs. Phillip Klesius and Craig Shoemaker, who are with the U. S. Department of Agriculture's Agricultural Research Service (ARS) in Auburn, Al., set out to fill those gaps.

Their study evaluated influence of vaccine formulation and doses of vaccine on protective immunity of channel catfish against Ich. The results showed that vaccination with live Ich theronts and trophonts killed with high-frequency sound waves stimulated production of protective antibodies in the catfish.

"This study demonstrated that vaccines against Ich induced protective immunity and could provide a unique solution to prevent this parasitic disease through vaccination," Xu said. "An Ich vaccine would have great impact by preventing the disease, minimizing loss of valuable fish and increasing profitability of aquaculture."

Xu noted that the study was a small, laboratory-scale endeavor, with unsolved problems on the road ahead to a commercial vaccine. One, for instance, involves producing a large quantity of Ich antigen for the vaccine and then formulating a vaccine that can be easily administered to large numbers of fish in a "bath" or in food, rather than by injection. In the bath approach, fish would be kept in a container or an enclosure with water containing the vaccine. This study is within the component of ARS National Program 106-"Aquaculture" to improve health and welfare of aquatic animals. Xu and colleagues hope their study will bring more attention to the research to combat this disease.