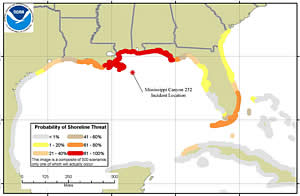 NOAA has used modeling of historical wind and ocean currents to project the likelihood that surface oil from the Deepwater Horizon/BP oil spill will impact additional U.S. coastline. This modeling, part of NOAA's comprehensive response to the unprecedented Gulf oil disaster, can help guide the ongoing preparedness, response and cleanup efforts.

"This NOAA model shows where oil may be likely to travel, thereby giving coastal states and communities information about potential threats of shoreline impacts. This kind of information should assist in the preparation of adequate preparedness measures," said Jane Lubchenco, Ph.D., under secretary of commerce for oceans and atmosphere and NOAA administrator. "NOAA is strongly committed to providing reliable information to the public and to responders at all levels."

In the technical report being released today, the model's results aggregate information from 500 distinct scenarios (model outcomes). Each assumes a 90-day oil flow rate of 33,000 barrels per day – the net amount from the flow rate ceiling of 60,000 barrels per day (the lower bound is 35,000 barrels/day) minus the daily estimated amount being skimmed, burned, and/or collected by the Top Hat mechanism. The model also accounts for the natural process of oil "weathering" or breaking down, and considers oil a threat to the shoreline if there is enough to cause a dull sheen within 20 miles of the coast. If, for example, 250 of the 500 scenarios indicated a shoreline threat for a particular area, the overall threat for that area would be a 50 percent probability.

The threat outlined in the model does not necessarily indicate that oil will come ashore. Whether or not oil comes ashore will depend upon wind and ocean currents at the time. In addition to these and other natural factors, booms and other countermeasures could be used to mitigate the actual coastal contact.

The modeling results released today are based on several simplifying assumptions. In particular, they do not start with the current footprint of the spill, but rather model the spill beginning at day one, based on historical weather and current patterns. Also, the analysis does not adjust for effects of dispersants on the volume, weathering and movement of oil on the water's surface. To date, no significant amount of oil has entered the Loop Current.

NOAA will continue to closely monitor the movement of the oil slick and develop daily 72-hour forecast projections. NOAA will also produce updated models of the long-term outlook as new data are gathered.

Updated scenarios and more information about the model can be found at: http://response.restoration.noaa.gov/deepwaterhorizon/longterm_outlook.