NOAA Commemorates The 100th Birthday Of Rms Titanic; Shipwreck 'A Powerful Symbol And An Icon' 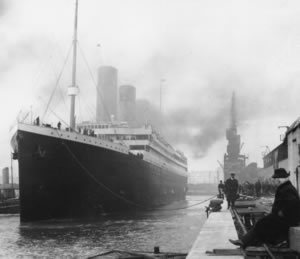 The Titanic as it left on its first & final voyage from South Hampton. Credit: Library of Congress

SILVER SPRING, Maryland -- The world's best known shipwreck turned 100 on May 31, 2011. Maritime historians generally consider the date of a ship's launch to be its "official birth date" and the Belfast, Northern Ireland, shipyard of Harland & Wolff launched RMS Titanic on May 31, 1911. Once afloat, RMS Titanic was then completed by shipyard workers before setting out on its tragic maiden voyage nearly a year later.

The 100th birthday of Titanic is a landmark event in that the wreck is now considered an archaeological resource site as defined under the United States Archaeological Resources Protection Act.

After it struck an iceberg and sank on April 15, 1912, the Titanic became the catalyst for the development of international law on safety of navigation, including the International Convention for the Safety of Life at Sea, as well as for the establishment of the International Maritime Organization, a United Nations agency with responsibility for the safety and security of shipping and prevention of marine pollution by ships.

The wreck of RMS Titanic was discovered in 1985 by a joint U.S.-French expedition in more than 12,400 feet of water in the North Atlantic. In recognition of the discovery of the wreck site and its historical and cultural significance, Congress passed the RMS Titanic Memorial Act of 1986.

In 2010, NOAA participated in a scientific expedition to the wreck with RMS Titanic Inc., the salvor-in-possession of the wreck, Woods Hole Oceanographic Institution and the National Park Service. The expedition succeeded in completing the first high resolution detailed map and three-dimensional documentation of the entire Titanic wreck site.

James Delgado, director of NOAA's Office of National Marine Sanctuaries Maritime Heritage Program and chief scientist on NOAA's 2010 mission, notes, "The wreck site of Titanic is a powerful, tangible link to the events of April 15, 1912, and very much a reminder of those who built, launched, sailed on, died on, or survived the sinking. A hundred years later, their stories still have relevance and speak to us from the depths through their personal effects and the power of archaeology."

The expedition partners are completing a draft charter for a Titanic Preservation Alliance and discussing next steps to ensure that the memorial, historical, archaeological and scientific values of Titanic are preserved for future generations while sharing the story and images of the wreck with the public. The charter would also adopt standards for future exploration and work on the site in accord with the NOAA guidelines.

David Alberg is superintendent of Monitor National Marine Sanctuary and advised the expedition on how the wreck site could be administered and protected from unauthorized activities and damage. "Like the USS Monitor, the Titanic is a shipwreck that has become a powerful symbol and an icon," states Alberg. "As stewards of the wreck of USS Monitor, we are proud to play a part in helping forge an agreement and a partnership to ensure a future for the Titanic site that can both be protected and also made accessible to the public through a variety of mediums, including the three-dimensional documentation done in 2010."