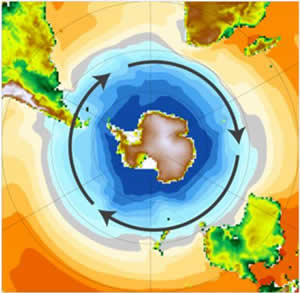 The Southern Ocean may slow the rate of global warming by absorbing significantly more heat and carbon dioxide than previously thought, according to new research.

The Southern Hemisphere westerly winds have moved southward in the last 30 years. A new climate model predicts that as the winds shift south, they can do a better job of transferring heat and carbon dioxide from the surface waters surrounding Antarctica into the deeper, colder waters.

The new finding surprised the scientists, said lead researcher Joellen L. Russell. "We think it will slow global warming. It won't reverse or stop it, but it will slow the rate of increase."

The new model Russell and her colleagues developed provides a realistic simulation of the Southern Hemisphere westerlies and Southern Ocean circulation.

Previous climate models did not have the winds properly located. In simulations of present-day climate, those models distorted the ocean's response to future increases in greenhouse gases.

"Because these winds have moved poleward, the Southern Ocean around Antarctica is likely to take up 20 percent more carbon dioxide than in a model where the winds are poorly located," said Russell, an assistant professor of geosciences at The University of Arizona in Tucson.

"But there are consequences," Russell said. "This isn't an unqualified good, even if more carbon dioxide and heat goes into the ocean."

As the atmosphere warms, storing more heat in the ocean will cause sea levels to rise even faster as the warmed water expands, she said. Adding more CO2 to the oceans will change their chemistry, making the water more acidic and less habitable for some marine organisms.

Russell and her colleagues conducted the study while she was a researcher at Princeton University and the National Oceanic and Atmospheric Administration's Geophysical Fluid Dynamics Laboratory in Princeton, N.J.

Her co-authors on the article, "The Southern Hemisphere Westerlies in a Warming World: Propping open the Door to the Deep Ocean,” are GFDL researchers Keith W. Dixon, Anand Gnanadesikan, Ronald J. Stouffer and J.R. Toggweiler. The article will be published in the December 15 issue of the Journal of Climate. NOAA funded the work.

The researchers characterize the Southern Ocean as "the crossroads of the global ocean's water masses, connecting the Atlantic, Pacific and Indian Oceans as well as connecting the deep ocean to the surface."

The current set of computer models that scientists use to predict future climate differ in the degree to which heat is sequestered by the Southern Ocean. The models vary in how they represent the behavior of the Southern Hemisphere Westerlies and the Antarctic Circumpolar Current, the largest current on the planet.

The team's model does a better job of depicting the location and observed southward shift of the Southern Hemisphere atmospheric winds than do previous global climate circulation models. The new model developed at GFDL shows that the poleward shift of the westerlies intensifies the strength of the winds as they whip past the tip of South America and circumnavigate Antarctica.

"It's like a huge blender," Russell said as she held up a globe and demonstrated how the winds whirl around the southernmost continent. Those winds, she said, propel the Antarctic Circumpolar Current. The current drives the upwelling of cold water from more than two miles deep. The heavy, cold water comes to the surface and then sinks back down, carrying the carbon dioxide and heat with it.

The new model forecasts this shift in the winds will continue into the future as greenhouse gases increase.

Stouffer said, “The poleward intensification of the westerlies will allow the ocean to remove additional heat and anthropogenic carbon dioxide from the atmosphere. Thus, the deep ocean has the potential to slow the atmospheric warming through the increased storage of heat and carbon.”

The team's next step will be figuring out how warming, ice-melt and ongoing shifts in the Southern Hemisphere westerlies will affect the biogeochemistry of the Southern Ocean and the global budgets for heat and carbon dioxide.