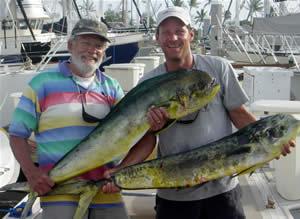 John Bartlett and his father show off a pair of mahi mahi caught near Oahu, Hawaii.

WASHINGTON, D.C. -- Recreational saltwater anglers pumped more than $31 billion into the U.S. economy in 2006, with Florida, Texas, California, Louisiana, and North Carolina receiving the largest share according to a new study issued by NOAA’s Fisheries Service.

At the national level, saltwater anglers are estimated to have spent $5.8 billion on trip-based expenses, such as ice, bait, and fuel, and another $25.6 billion on fishing equipment and durable goods like fishing rods, fishing tackle, and boats.

The Economic Contribution of Marine Angler Expenditures in the United States 2006 is available online. A hardcopy of this report may be obtained by contacting Scott Steinback via e-mail or by mail at the address below: