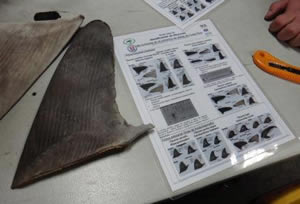 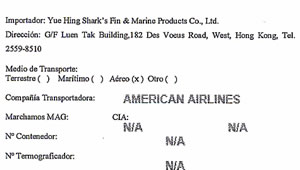 Pretoma reports that American Airlines is transporting shark fins from Costa Rica, via the U.S., to Hong Kong

SAN JOSE, Costa Rica -- Conservation groups PRETOMA and Turtle Island Restoration Network and have found evidence that hammerhead sharks (Sphyrna lewini) are being exported from Costa Rican ports and flown to plates in Hong Kong by way of stop-overs on U.S. soil.

"We warned the Costa Rican officials that these exports would occur in violation of the ESA, but the higher authorities of the Ministry of Environment decided to proceed with the exports anyway," said a concerned Randall Arauz of PRETOMA. "We blew the whistle and alerted the U.S. authorities as well, with no positive response either."

PRETOMA and Turtle Island learned that Costa Rica exported hammerhead shark fins in December and again in February. Given the routing of cargo shipments to China from Costa Rica, these shipments clearly touched down in the U.S., where they should have been confiscated under the ESA and thus been prevented from further trade and sale. However, the U.S. Fish and Wildlife Service failed to enforce the ESA, and allowed the shipments to continue on to Hong Kong.

"All scalloped hammerhead fins exported from Costa Rica derive from the endangered Eastern Pacific population that is protected under the ESA. The fact that the U.S. failed to interrupt the shipments the moment they touched down on U.S. soil, makes them an accomplice in the unregulated, international trade of shark fins," said Maike Heidemeyer, a biologist with PRETOMA who investigated the shipments.